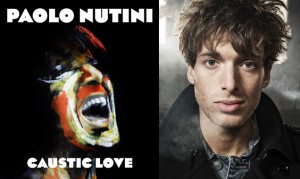 Paolo Nutini releases his eagerly anticipated new album ‘Caustic Love’ on April 14th. Produced by Paolo and Dani Castelar, the album features 12 sparkling new Nutini original songs that sound like no one else. It’s great to have him back.

Still only 27, this Scottish singer has grown both vocally and musically since his acclaimed ‘Sunny Side Up’ almost five years ago.  That landmark album sold 1.8 million copies in the UK while his 2006 pop flavoured debut, ‘These Streets’ sold 1.5 million.

First single ‘Scream (Funk My Life Up)’, already grooving the national airwaves, is just a taste of what is to follow on the album.  Highlights include the epic ‘Iron Sky’, the sultry r&b tease of ‘One Day’, the bluesy swagger of ‘Let Me Down Easy’, the beauty of ‘Better Man’ and ‘Fashion’ featuring Janelle Monae.

“The best thing, still, is having an idea, and eventually hearing that idea back through a pair of speakers,” Paolo told the Sunday Times Culture. “When that works, it leads to such fulfilment and joy.”

That joy is all over ‘Caustic Love’. It’s contagious. It’s the sound of someone in love with music. Paolo previewed much of the new album recently at a tremendous show at London’s Boston Arms with his crackerjack ten piece band. The reviews were unanimous in their praise.

The album will be released on CD, vinyl and digitally.

More dates to be announced soon.