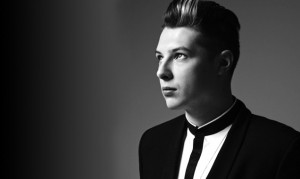 John Newman, one of the breakthrough artists of 2013, who has been nominated for 3 Brit Awards in the Best British Male Solo Artist, Best British Single and Best Video categories, has announced his third major UK tour since the release in October of his 300,000 selling debut album “Tribute”. Tickets for the following shows go on general sale on Friday 21st February, 9am via  see tickets. The shows go on exclusive pre-sale to members of John’s database via www.johnnewman.co.uk from Wednesday 19th February, 9am.

Newman’s whose widely acclaimed debut album entered the UK chart at no. 1 and has now sold over 300,000 copies worldwide, releases his brand new single “Out Of My Head” on April 7th through Island Records. One of the standout tracks of the album, “Out Of My Head” looks set to follow the massive no.1 hit single “Love Me Again”, which was the #1 airplay record of 2013 in the UK, and “Cheating” Top 5 airplay, into the charts and hearts of his ever expanding fanbase. UK fans can hear these, and all the other songs on the album live, as Newman continues his second sell-out UK tour this month.

The success hasn’t been confined to these shores with John’s career really taking off in the US and across the globe. January saw him playing his first ever sell-out US dates in New York, Los Angeles, Chicago and Boston, and performing on no less than 3 of the most prestigious national TV shows in the US; Ellen, Good Morning America and Late Night With Jimmy Fallon. During his visit the album reached no.2 on the US iTunes chart. The European and Antipodean success is equally impressive with Newman achieving double platinum status in Australia, Italy, Czech Republic and Norway, Platinum success in the UK, Ireland, New Zealand, Norway and Switzerland and Gold status in Austria, Belgium, Canada, Germany, the Netherlands and Sweden. “Love Me Again” has sold over 2 million singles worldwide peaking at no. 1 in iTunes in Portugal, Bulgaria, Czech Republic, Estonia, Latvia, Lithuania, Slovenia, Belarus, Ghana, Kazakhstan, Namibia and of course the UK. In addition the song has been streamed over 50 million times on Spotify.