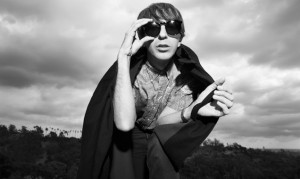 Los Angeles-based pop maestro Bart Davenport extends his west coast tour with six California dates, including two solo-acoustic shows opening for the legendary post-punk band Echo & The Bunnymen. Full tour dates below. Like Virginia Woolf’s ‘Orlando’, Bart Davenport has seen many an era. He’s been a mod, a bluesman and a softrock troubadour. His latest full-length album, ‘Physical World’ (Lovemonk/Burger) is a culmination of all those incarnations and more. With shirts from the 60s, guitars from the 80s and the timeless voice of a real crooner, it’s a one-of-a-kind hybrid of paisley pop and sweet soul. One foot in reality, the other firmly planted in the fantasy world within the three minute pop song, Bart tells of life and love in the modern world with sincerity and a subtle sense of humor.