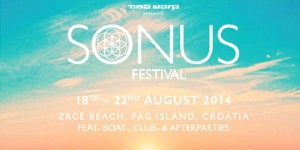 Sonus Festival is located at Zrce Beach on Pag Island, croatia’s renowned party spot. The closest city is Novalja, and the party is presented across two on-site venue Club Papaya and Kalypso Club as well as beach parties that extend the sun-kissed vibe, and boat parties that tour the stunning coastal line. Zadar is the closest airport, while Split and Zagreb are also within a shuttle ride away