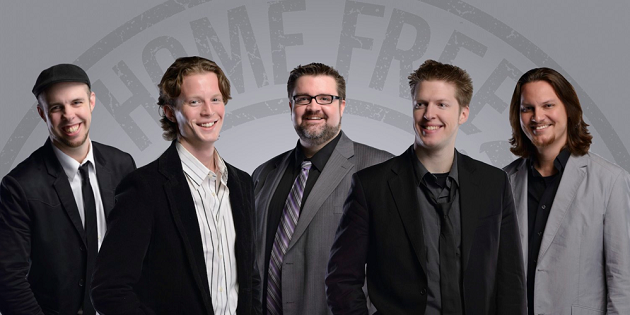 Home Free, the winners of the competitive fourth season of The Sing-Off, whose performances captivated millions and launched the group into the national spotlight, has signed with Columbia Records. Their major label debut album Crazy Life is available digitally now and immediately hit #1 on the iTunes country chart and #4 on the overall iTunes chart. The physical album will be available on February 18.

Home Free performed on the Today Show yesterday in their first national appearance since winning The Sing-Off. Check out their performance of “Wake Me Up” here.

Crazy Life features a collection of original music as well as a selection of songs the group performed on the show including, “Ring Of Fire” (Johnny Cash) and a Hunter Hayes medley featuring “I Want Crazy” from the show’s finale. Home Free will join a handful of finalists for The Sing-Off Live Tour!, which kicks off a 32-night run of dates on February 19 in Verona, NY.

The all-male country group of Minnesota natives — Chris Rupp, Tim Foust, Austin Brown, Rob Lundquist and Adam Rupp — are a tight-knit bunch that have gotten even closer by performing in concerts across the country. Their years of performance experience add to their refreshing country sound. As an a cappella ensemble, Home Free performs without any instruments, only their voices. Adam Rupp is an award-winning vocal percussionist, Austin Brown and Rob Lundquist are tenors, Chris Rupp is a baritone and Tim Foust provides the bass which The Sing-Off’ s host Nick Lachey called a “seismic event.”

On The Sing-Off , Home Free matched its vocal talent and polished stage presence with precise arrangements and high-energy vocals that brought the audience and the judges to their feet night after night. The a cappella quintet regularly reworked classic and modern numbers like Tom Cochrane’s “Life is a Highway,” and Roy Orbison’s “Pretty Woman,” giving the songs their own distinctive country twang. Throughout the show Home Free showed their flexibility in both style and technique.