Forged out of the ashes of the legendary Chicago band Usurper, Scythe was spawned in 2009 to expand upon Usurper’s legacy of headbanging, fistbanging, underground metal anthems. Scythe’s metal assault incorporates the style of ’80s thrash/black/speed metal, combined with elements of classic heavy metal and heavy rock ‘n’ roll to create an original sound that follows no modern trends. 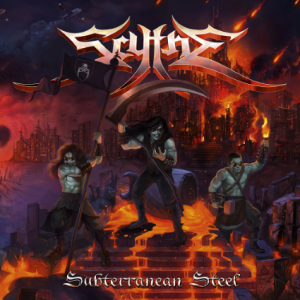 In 2012, Scythe released its debut album for Primitive Reaction Records entitled Beware The Scythe. Beware The Scythe became an instant underground metal classic, garnishing positive reviews and interviews in magazines and webzines worldwide, including a mention in the “Top Ten Albums of 2012” from legendary German magazine Voices From the Darkside.

This year and next, Scythe will perform concerts and shows across North America, including direct support for Japan’s Sabbat, as well as tour plans for South America in 2014. Be prepared for the leathery onslaught of molten metal…be prepared for the Subterranean Steel!