Today, Iron Dogs announces December 2nd as the international release date for their second album ‘Free and Wild’. An iron-studded statement of intent, Free and Wild follows on from last year’s cult Cold Bitch debut, also released on vinyl. Here, these Canadian true metal warriors perfect their self-proclaimed “Total Stratocaster Metal played loud, fast, and raw!” as if nothing happened in heavy metal past 1983. In fact, the entirety of Free and Wild could have come at that point when NWOBHM was reaching its apex, hard rock was getting harder, and speed metal was in its very infancy. Any number of the band’s stated influences – from Angel Witch to Medieval, from Cirith Ungol to English Dogs, from Heavy Load to Omen – paints a picture of the power contained with Free and Wild, but its Iron Dods’ steadfast commitment to reckless abandon coupled with time-honored metal songcraft that will truly liberate even the most stubborn soul! 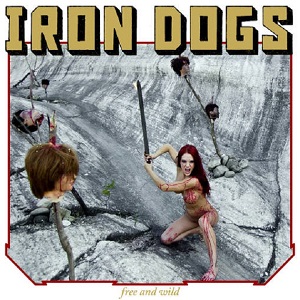