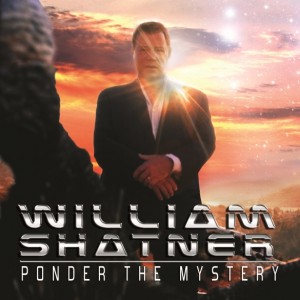 As word began to circulate about William Shatner’s newest musical project, the prog rock concept album Ponder The Mystery, critics and fans quickly realized it was a match made, if not in Heaven, then in the most glorious reaches of the galaxy. Shatner is after all an enormously popular and celebrated icon of science fiction fantasy, and no musical genre is as invested in, devoted to or driven by fantasy and the imaginative as progressive rock. And though Mr. Shatner is no stranger to the musical world, what sets this effort apart from previous endeavors is the fact that he co-wrote the album, penning a set of intensely personal lyrics for producer/multi-instrumentalist Billy Sherwood (of the prog rock institution Yes) to compose around. And now, after months of puzzled rumors, probing questions and ponderous speculation, the album is finally ready to be embraced by the general public; it will be released on CD, vinyl and digital formats October 8, 2013.

Joining the two Bill’s on this journey into the mysteries of human curiosity and consciousness is a group of virtuosos from numerous genres and fields, including guitarists Steve Vai, Al Di Meola and Zoot Horn Rollo, keyboardists Rick Wakeman and the late George Duke, saxophonists Dave Koz, Edgar Winter and Nik Turner, as well as The Doors’ own Robby Krieger and country legend Vince Gill. Many of these artists leapt at the opportunity to contribute to Mr. Shatner’s venture, such as Steve Vai who performs on the album’s eponymous single, and declares, “It was an absolute hoot to play on Bill’s track. It’s great to see and hear that after all these years his contributions are still fresh!” Longtime friend Vince Gill contributed acoustic guitars and mandolin to the album and shares this: “I’ve known William for awhile and have worked with him on one of his previous charity events. It was so cool for me to play on his new album. Overall, it really means a lot to be part of projects that William is doing at this point of his life. William is a special person and I really enjoy any chance that I get to work with him.”

Saxophonist Dave Koz offers this assessment of the project: “What I love most about this album is that it feels like all the musicians were in this big top – a sort of three-ring circus…you have all these talented people, each bringing their unique offering to the table. Then there’s Bill, the ring-leader, with a big smile on his face, inspiring us all to bring even more to the party. It was a blast, and I love the way it turned out. Unlike anything I’ve EVER done before. But then again, that’s what working with an icon will get you!”

Finally, Rick Wakeman sums things up nicely: “I’ve never adhered to the assumption that oil and water don’t mix…stir them hard enough and add a few other ingredients and they certainly will mix, and give an interesting and pretty unique result too. So I’m all for Progressive Shatner Rock and it was a pleasure to play on the album and be involved!”