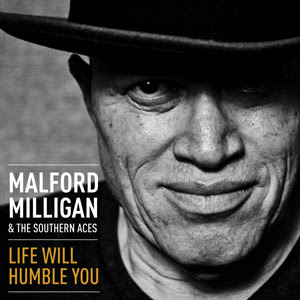 Musically this is Malford Milligan going back to his bare roots, a perfect melting-pot of traditional old-school soul and r&b, country-soul as recorded at the Muscle Shoals and Stax studios, some Southern gospel, and several other essential musical ingredients from the Southern parts of the United States. In short soulful americana, in its purest form: stripped down, rootsy, groovy, intense, organic and intimite.

Lyrically and thematically this is Malford Milligan and old friend & producer/co-writer Jack Hustinx each and both reflecting on their well-lived and well-spent 6 decades so far, losing people and gaining wisdom. The roads they have travelled have been an interesting and meaningful journey, teaching them that “life will humble you” as you go along, with all its ups & downs and pros & cons.

With his strong and powerful Soul-voice he has often been compared to giants like Otis Redding, Al Green and James Carr. As an partially sighted albino black Malford Milligan experienced a double dose of America’s pervasive racial confusions in his youth. Milligan is an eight-time award-winner as “Best Vocalist” at the annual Austin Music Awards (last awarded in 2015).

In 1994 he helped form what amounted to a Texas supergroup, Storyville, which also included David Holt, David Grissom, and the rhythm section from Stevie Ray Vaughan’s Double Trouble. Life Will Humble You will be released by Royal Family Records on October 26th.