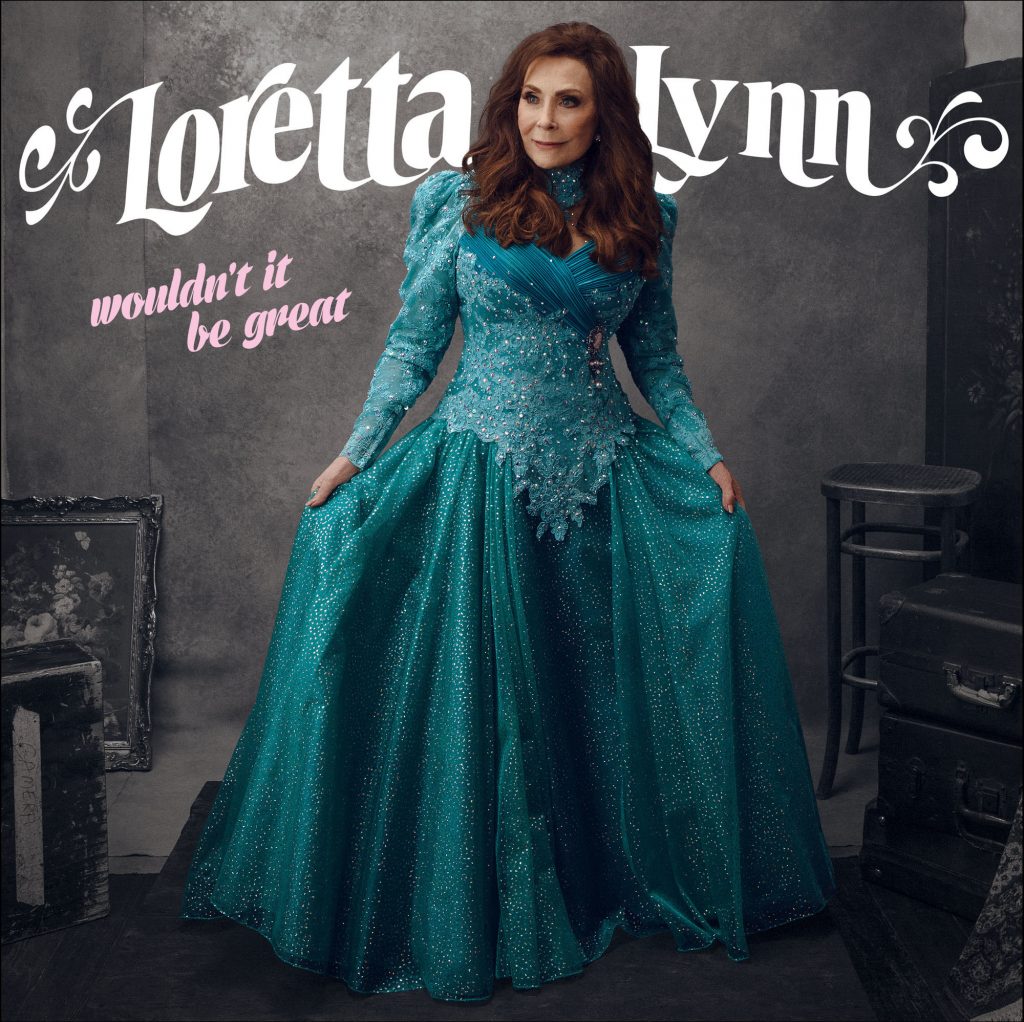 Legacy Recordings (a division of Sony Music Entertainment) will release Wouldn’t It Be Great, the new studio album from American music icon Loretta Lynn, on Friday, September 28. One of the most deeply personal albums of Loretta Lynn’s career, Wouldn’t It Be Great communicates in song the hard truths and spiritual insights Loretta has gathered throughout her life and reflects the resilience that sustains her still. Comprised entirely of songs written (or co-written) by Loretta, the album premieres new compositions alongside soulful reinterpretations of enduring classics from her catalog.

“This new record means so much to me, but this last year I had to focus on my health and I decided to hold up the release,” said Loretta. “I’m feelin’ good and look forward to it comin’ out. It was really important to me to be a part of it being released and I’m excited to celebrate with everybody!”

“Wouldn’t It Be Great?” is the last song Loretta wrote for her late husband (Oliver “Doolittle” Lynn). “Well,” Loretta observes, “my husband liked to drink a lot and that’s where that song comes from… ‘Say you love me just one time, with a sober mind’… I always liked that song but I never liked to sing it around Doo.” “That song just always meant so much to me,” continues their daughter (and album co-producer) Patsy Lynn Russell, “because of the lyrics, you know, ‘when my fancy lace couldn’t turn your face,’ it was just so powerful and was a song that needed to be recorded for this album with Loretta. It shows just how masterful my mom is with writing down her feelings.”

Like its predecessor, the critically-acclaimed, Grammy-nominated Full Circle (released March 2016), Wouldn’t It Be Great was mainly recorded at the Cash Cabin Studio in Hendersonville, Tennessee, with producers Patsy Lynn Russell and John Carter Cash.

An exploration of Loretta’s songwriting, Wouldn’t It Be Great finds her communicating the universality of human experience–love in all its intoxication and heartbreak, the abiding things of soul and spirit, the transformative power of music and connecting to the world. Wouldn’t It Be Great debuts new songs–“Ruby’s Stool,” “Ain’t No Time To Go,” “I’m Dying For Someone To Live For”–alongside newly recorded renditions of recent compositions (“God Makes No Mistakes,” from Lynn’s 2004 Grammy-winning Jack White-produced Van Lear Rose) and immortal classics like “Coal Miner’s Daughter” (the song Loretta says she’s most proud to have written, also the title of her 1976 memoir and subsequent Oscar-winning 1982 film adaptation) and “Don’t Come Home A’ Drinkin’ (With Lovin’ On Your Mind),” her first of 16 career No. 1 country singles.

A self-taught singer, songwriter and performer, Loretta Lynn is an archetype of American music, a singular artist whose music defined a genre and whose songs continue to inform new generations of musicians.

Loretta made waves in the American music world with 2016’s Full Circle, her first album in more than a decade. A powerful return-to-form, acclaimed by fans and critics alike, the album debuted at No. 4 on Billboard’s country charts (Loretta’s 40th Top 10 country album and her highest-charting album ever on the Billboard 200) and was nominated for Best Country Album at the 59th Annual Grammy Awards. Loretta followed Full Circle that same year with White Christmas Blue, an album sending listeners on seasonal trip to Lynn’s hometown of Butcher Hollow, Kentucky during Christmastime.

As part of its 50th anniversary commemoration, the Country Music Hall of Fame® and Museum mounted a major exhibition in 2017 focusing on the life, art and music of Loretta Lynn. The popular exhibition, “Loretta Lynn: Blue Kentucky Girl,” opened August 25, 2017 and closed August 5, 2018.

Loretta Lynn has long been established as the undisputed Queen of Country Music, with more than 50 years of recording and touring to her name. A self-taught guitarist and songwriter, Lynn was one of the most distinctive performers in Nashville in the 1960s and 1970s. She shook up Nashville by writing her own songs, many of which tackled boundary-pushing topics drawn from her own life experiences as a wife and mother. “Coal Miner’s Daughter,” “Fist City” and “Don’t Come Home A’ Drinkin’ (With Lovin’ on Your Mind)” are just three of 16 country No. 1 singles.

Lynn is also one of the most awarded musicians of all time. She has been inducted into more music Halls of Fame than any female recording artist, including The Country Music Hall of Fame and the Songwriters Hall of Fame, and was the first woman to be named the Country Music Association’s Entertainer of the Year in 1972. Lynn received Kennedy Center Honors in 2003 and a Presidential Medal of Freedom in 2013. In 2015, she was named recipient of Billboard’s inaugural Women in Music “Legend” Award. Lynn has won four Grammy Awards (including a Grammy Lifetime Achievement Award in 2010) and sold more than 45 million records worldwide.

Loretta Lynn – Wouldn’t It Be Great