The arrival of Thievery Corporation’s Treasures from the Temple begins with rare footage from the deep roots of Reggae history dancing behind vocals from long-time contributor and American dancehall pioneer, Notch. The video coincides with the celebration of the 4/20 holiday and sets the beat for a full, 12-track journey through a treasure trove of rarities, B-sides, and remixes of material recorded during the band’s Temple sessions at GeeJam Studios in Port Antonio, Jamaica. 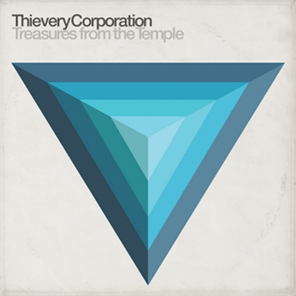 As uncertainty falls across the digital landscape, a yearning emerges for the art and music that returns us to the roots of quality, culture, and community while empowering the same, future-forward mindset that has shaped the Thievery sound to date. Tracks such as “San San Rock,” and “Destroy the Wicked” are treasured rarities echoing the band’s dancehall-influenced past to meet with the timeliness, trip-hop sound of “Music to Make You Stagger” and “Guidance.” Hip-Hop veteran Mr. Lif teams up with the soulful vocals of Sitali on “History” and “Joy Ride” while LouLou Ghelichkhani takes us on surreal and sultry journey on “Voyage Libre” and “La Force de Melodie.” Vocalist Natalia Clavier contributes to “Water Under the Bridge” and Jamaican native Raquel Jones, a featured vocalist on the band’s 2017 Temple of I & I release, gets the official Thievery remix treatment on “Letter to The Editor” and “Road Block.”

How many highly successful musical artists do you know that have thrived for 20 years without a radio hit, a big budget video, or major label backing? Moreover, have managed to do high-profile TV appearances, own and operate their own independent label since day one, sell several million albums and continue to expand their fan base across the globe each year. Thievery Corporation have collaborated with such uniquely famed artists such as David Byrne, Perry Farrell, The Flaming Lips, Anushka Shankar, Femi Kuti, Seu Jorge, Bebel Gilberto, and have been featured on major film soundtracks such as Garden State. They’ve headlined top music festivals such as Coachella and Lollapalooza, and have influenced a whole generation of electronic producers and DJs. If you add these elements together, you can arrive at only one conclusion: Rob Garza and Eric Hilton, aka: Thievery Corporation.