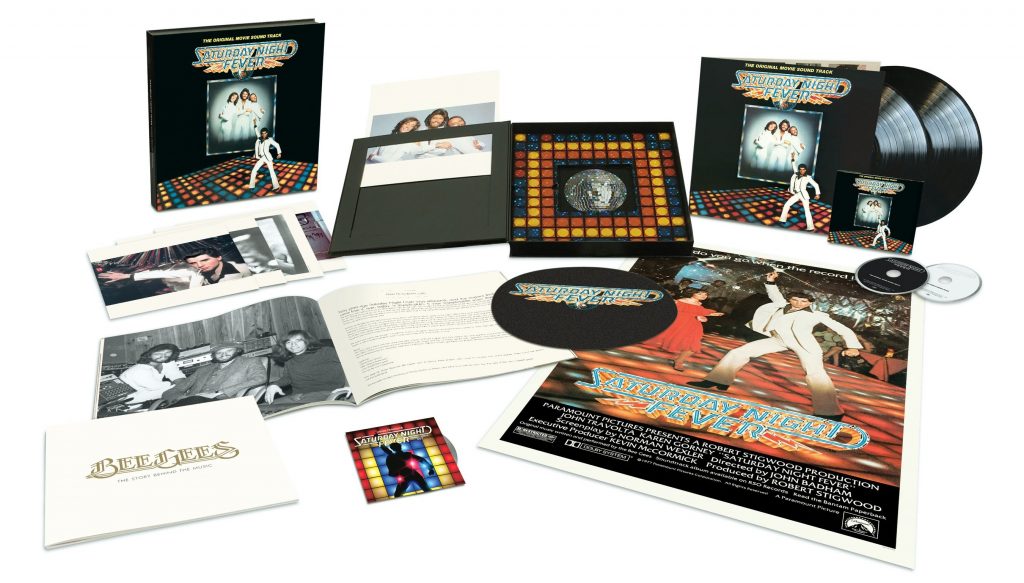 In 1977, Saturday Night Fever captured and propelled a global cultural movement like few movies before or since, with its iconic, Bee Gees-led soundtrack driving the film’s dance floor action. A worldwide smash upon release and an essential modern classic for all time, ‘Saturday Night Fever (The Original Movie Soundtrack)’ spawned four No. 1 singles and won the GRAMMY Award® for Album of the Year. On November 17, Capitol/UMe will release the illustrious soundtrack’s 40th Anniversary Edition in expanded commemorative configurations including a super deluxe box set that pairs the remastered album and remixes with the film’s 4K-restored 40th Anniversary Director’s Cut.

Composed and performed primarily by the Bee Gees, the legendary album’s mega-hits include “Stayin’ Alive,” “Night Fever,” “How Deep Is Your Love,” “More Than A Woman,” and “If I Can’t Have You.” Certified 15-times multi-platinum by the RIAA for U.S. album sales totaling more than 15 million, ‘Saturday Night Fever (The Original Movie Soundtrack)’ has sold more than 40 million copies around the world. The album topped the U.S. album charts at No. 1 for 24 consecutive weeks and remained on Billboard’s albums chart for 120 weeks, also holding the No. 1 spot on the U.K. album charts for 18 consecutive weeks. In 2004, ‘Saturday Night Fever (The Original Movie Soundtrack)’ was inducted into the GRAMMY Hall Of Fame® and it was added to the U.S. Library of Congress’ National Recording Registry as a culturally significant work in 2013.

For Saturday Night Fever’s 40th Anniversary, the film’s director John Badham worked with Paramount Pictures to restore the film in 4K resolution using the original negative, and to update the film’s surround sound mix to further enhance viewers’ enjoyment of its incredible soundtrack. During this process, he added scenes to the R-rated theatrical version that round out character and plot, making the 40th Anniversary Director’s Cut the definitive representation of his original vision.

With John Travolta’s electrifying Academy Award®-nominated performance, the Bee Gees’ explosive soundtrack and, of course, the unforgettable dancing, Saturday Night Fever captured the angst and brio of the time, making an indelible impact on popular culture. Forty years later, the film about a Brooklyn kid with no prospects who lives for Saturday night continues to be revered and celebrated.

The Bee Gees – brothers Barry, Robin and Maurice Gibb – have earned their stature as one of the world’s most popular and bestselling groups of all time. Having recorded 22 studio albums and for numerous soundtracks, including the monumentally successful Saturday Night Fever, the Bee Gees infused popular culture with dozens of worldwide hit singles that featured their singular and highly influential three-part harmonies. They achieved nine Number Ones and 23 Top 10 singles on the Billboard Hot 100 chart, including “How Deep Is Your Love,” “Night Fever,” and “Stayin’ Alive” from Saturday Night Fever, and hit charts around the world with many other classics, including “How Can You Mend A Broken Heart,” “I Started A Joke,” “Lonely Days,” “Words,” and “You Win Again.”

Among the honors bestowed upon the Bee Gees are five GRAMMY Awards®, as well as The Recording Academy’s Lifetime Achievement Award, Legend Award, and President’s Award; five American Music Awards; a Brit Award for Outstanding Contribution to Music; and a Legend Award from the World Music Awards. They have been inducted into the Rock and Roll Hall of Fame, the Songwriters Hall of Fame, BMI Icons, the Vocal Group Hall of Fame, and the Dance Music Hall of Fame. All three brothers were appointed Commanders in the Order of the British Empire in 2001.

CD 2
The Serban Ghenea Mixes
1. Stayin’ Alive
2. Night Fever
3. How Deep Is Your Love
4. You Should Be Dancing