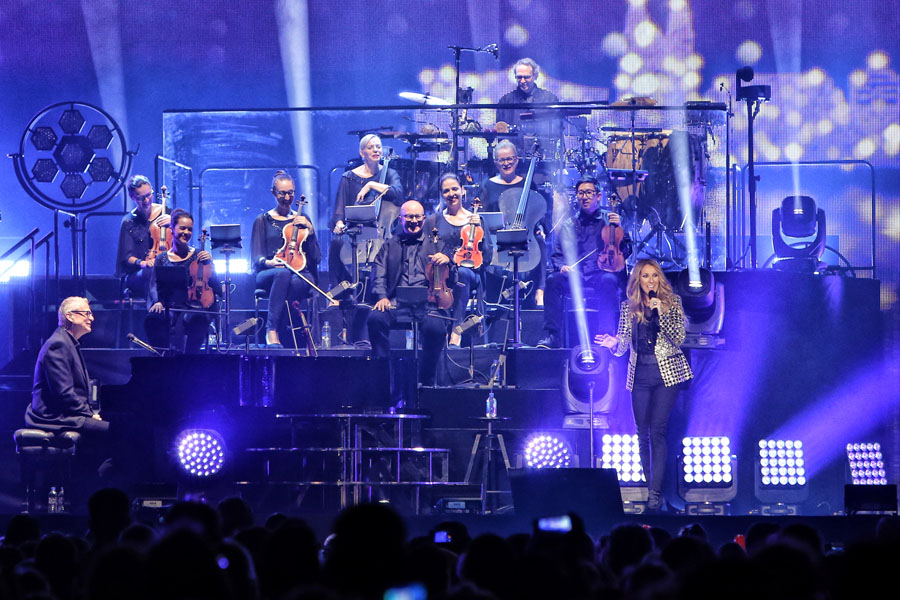 Friday night it got heated in a sold-out Gelredome. Nevertheless it didn’t seem to bother anybody being cramped together, all came to see the Canadian superstar Céline Dion shine after a very long time. Dion has done a long series of shows in Vagas across the years. Only being interrupted by the care for her late husband.
The Gelredome was transformed into an enormous venue filled with seating areas, something we are not at custom to in the footballstadion in Arnhem. Where normally green grass is, was now filled with thousands of chairs, therefore loads of the biggest fans gathered prior to the show in attempt to try to get the best seats.

The support act did a wonderful job. French-Canadian Véronic DiCaire brought us hit after hit emphasizing the biggest hits of female superstars of all time. 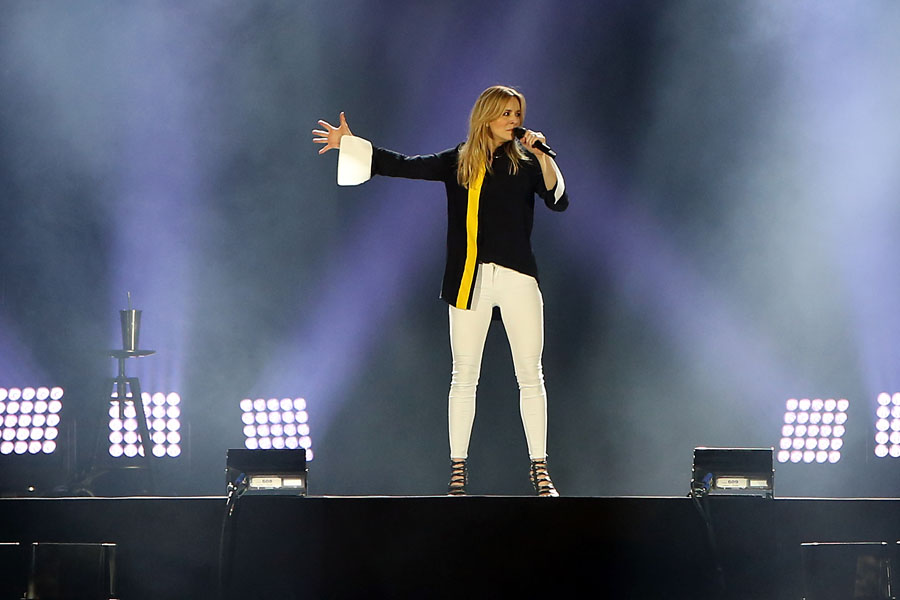 Céline Dion kicked off twenty minutes late with ‘The Power of Love‘ a Jennifer Rush song, making everybody get up off the seats and start dancing. Why there even were seats in the beginning remains a question, from the front to the back of the Gedredome, from start to finish everyone was jumping, dancing and having a good time, but gratefully took a seat at the quieter songs. Rightly so, Dion turned it into a true party. Even Céline did not get why there were chairs. When an usher tried to admonish the audience to take their seats, it was Dion that encouraged everyone to keep on dancing.

The singer was strutting the stage, which was packed with a copious amount of musicians. A true string ensemble was arranged by Céline for the Dutch gig of the Céline Dion Live 2017 tour. She thought that it was fantastic, as she said after the second song “Fantastisch” (Dutch for “Fantastic”) and even gave a semi-Dutch Fantastic-rap. The Canadian performed her greatest successes in two and an half hour show, songs of her own and several of her favorite icons. Céline Dion dared to sing Queen, Cindy Lauper and Carole King songs, as well as songs of Beauty and the Beast by Alan Menken. It all went so well that it looked like Dion was giving the crowd a Top Singles Chart live in front of them. 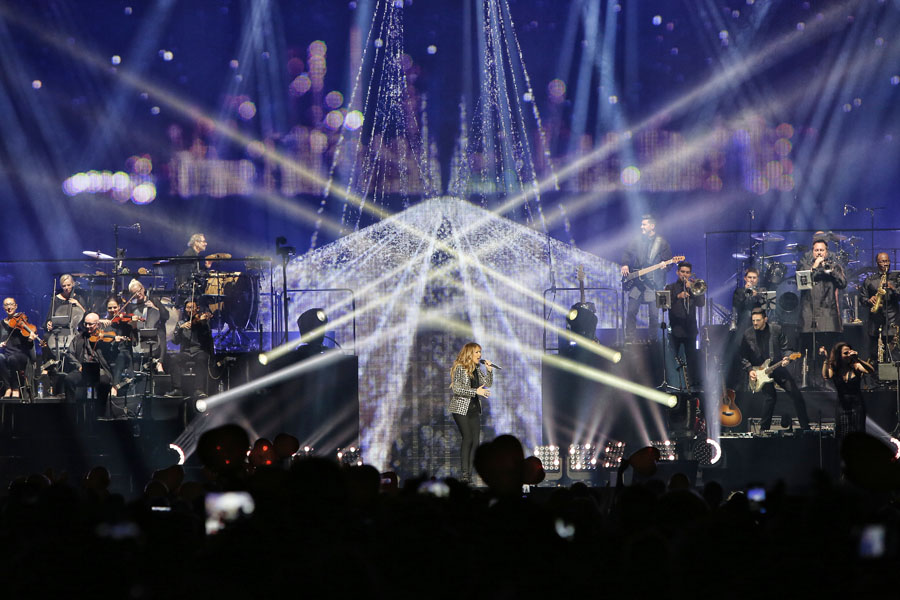 Dion showed respect for the Dutch audience by perfectioning the pronunciation of “Fantastisch” and praised the Dutch radio show Countdown Café program by Veronica radio, where she was invited at her breakthrough years ago. By interweaving a lot of intermezzo’s with the orchestra and the triggering lightshow, the performance seemed like an open audition for a show with the Night of the Proms tour (not to be mistaken by the British First Night of the Proms), or rather with the red lights, Symfonica in Rosso, the famous Dutch show inviting huge artists to do a show in the theme “Red”. The wardrobe changes made it look like there was a completely new artist on stage. 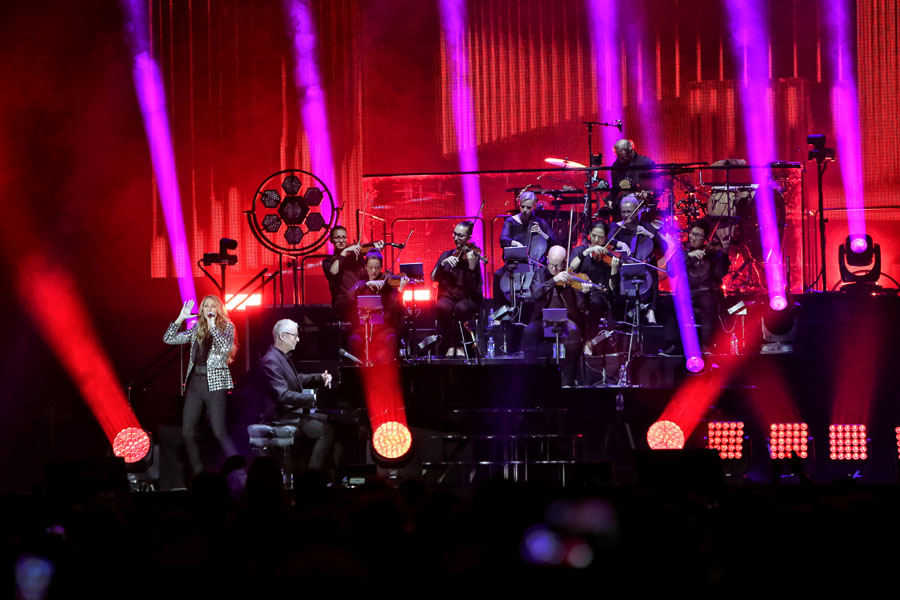 Despite the big distance between the stage and the audience Céline managed to interact with the people in Gelredome. Thanking the technicians and all the staff back- and frontstage, leaving no one out. “Yes, they could even be under your seats” she said, making a man taking a look under his chair in fright. “Oh I am only joking!”
“I love you” replied the man which ended up in a “I love you most” battle. Céline did win this one and like a true diva she ended it with a fierce pose, proving she still is a tough cookie. Halfway through the show she extensively took her time to thank the fans for the support after the passing away of her husband René, and als thanked her good friend, Pink, who wrote her the song ‘Recovering’. A song made for everyone who has ever lost a loved one. Dion gave it her all, which was rewarded with a very long standing ovation. Céline was touched by that, and the very emotional song, several tears slowly made their way down over her cheeks. Like the star she is, never missing a note and always on key.

49 Years and on the recovery of a great loss, Céline Dion looked stronger than ever before. After years of absence in the Netherlands she was strong, fierce and full of confidence. For many Dion seems too soft and sweet but the singer proved to be pure, powerfull and solid. Chappeau! 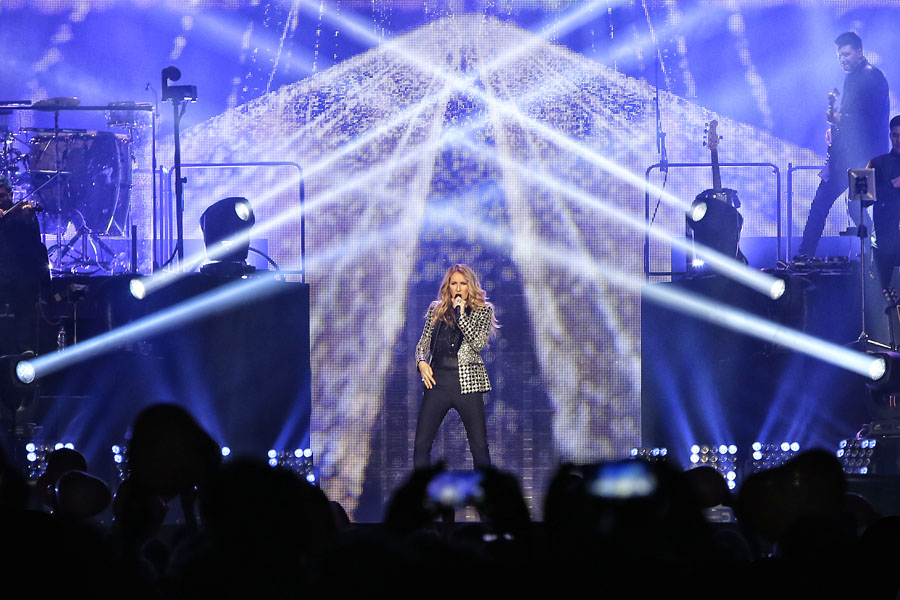