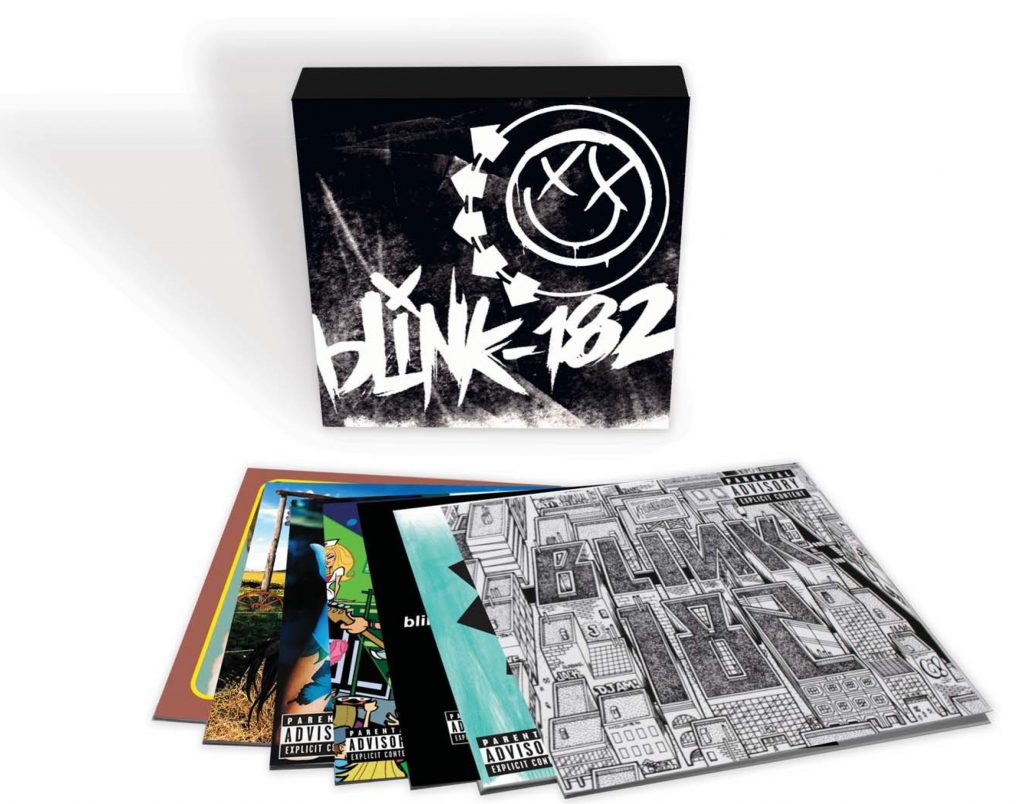 Since their humble beginnings twenty-four years ago, when they started playing in a San Diego garage, Blink-182 has sold over fifty million albums worldwide and rocked audiences from Adelaide to Zurich having become one of the defining rock bands of their generation. The trio of bassist/vocalist Mark Hoppus, guitarist/vocalist Tom DeLonge and drummer Travis Barker, emerged from the Southern California pop-punk scene of the early ’90s and quickly gained a reputation for their raucous live shows, incredibly catchy songs and irreverent, tongue-in-cheek humor. Blink-182’s latest studio release,California, with new member Matt Skiba of Alkaline Trio who replaced DeLonge, debuted at #1 in July, giving the band their second career #1 album and first in 15 years.

Geffen/UMe will bring Blink-182’s entire Universal catalog together for the first time as a limited edition vinyl box set on October 7. The 10-LP collection will include their six studio albums on heavyweight 180-gram vinyl and consist of 1995’s Cheshire Cat, 1997’s Dude Ranch, 1999’s Enema Of The State and 2001’s Take Off Your Pants And Jacket on single LPs and 2003’s blink-182, 2011’s Neighborhoods and their riotous live record, 2000’s The Mark, Tom & Travis Show: The Enema Strikes Back!, as double LPs. 182 copies of the vinyl box will come with exclusive stickers and a slipmat.

Cheshire Cat was Blink-182’s debut studio album. Recorded at Westbeach Recorders in Los Angeles and  Santee, Calif.’s Doubletime Studio and produced by Otis Barthoulameu and the band themselves, the album was originally released on February 17, 1995 through local San Diego-based record label Cargo Music who signed the band after hearing a handful of demos. The trio, composed of guitarist Tom DeLonge, bassist Mark Hoppus and drummer Scott Raynor, demonstrated their knack for catchy, energetic pop-punk and hinted at what was to come, leading to several major labels courting the band. Standouts “M+M’s” and “Wasting Time” were released as singles to promote the album and received popularity on local radio. The band embarked on their first-ever national tour and expanded their fan base exponentially outside of So. Cal.

Dude Ranch was the band’s second studio album for Cargo and was picked up for distribution by MCA, who signed the band in 1996 after winning a bidding war. It was the band’s last with original drummer Scott Raynorbefore he was replaced by Travis Barker of the Orange Country ska band The Aquabats. Recorded at Big Fish Studios in Encinitas, Calif., with producer Mark Trombino, the album produced the rock radio smash, “Dammit,” on the heels of the band’s worldwide tour on the Van’s Warped Tour. Three more singles were released, including “Apple Shampoo,” “Dick Lips” and “Josie,” with a video that was an MTV fixture. The album peaked at #67 on the Billboard 200, but eventually went platinum by 2000. U.K.’s Kerrang! ranked it #15 on its list of the “51 Greatest Pop Punk Albums Ever.”

Blink-182’s third studio album, and first with new drummer Travis Barker, Enema of the State, marked their breakthrough to the mainstream and went on to sell 15 million copies sold worldwide, launching them to global fame. The band enlisted producer Jerry Finn, who a few years earlier had worked on Green Day’s smash,Dookie, and recorded the album at various studios throughout San Diego and Los Angeles over a three-month period. “What’s My Age Again?,” “All the Small Things” and “Adam’s Song” became hit singles and staples on MTV and crossed over into Top 40. “What’s My Age Again?” achieved the highest success on Billboard’sModern Rock Tracks chart, where it peaked at number two. It registered within the top 20 on the UK Singles Chart as well, peaking at number 17. The subsequent “All The Small Things” crossed over from alt-rock radio to contemporary hit radio, peaking at #6 on Billboard’s Hot 100 and #1 on the Modern Rock Tracks chart. It peaked at #2 in the UK and was a top 10 hit in Australia, Austria, Ireland, Italy and Sweden.  The album peaked at #9 on the Billboard 200, selling 109,000 copies in the U.S. its first week and eventually was certified five times platinum. The album was an international phenomenon: quadruple platinum in Canada, triple platinum inAustralia, double platinum in Italy, platinum in the UK, as well as gold in Austria, Germany, Indonesia, Mexico,the Philippines and Switzerland. Ranked #37 on Rolling Stone’s 2016 list of the “40 Greatest Punk Albums of All Time,” the album is cited as having an enormous impact on contemporary pop punk, reinventing it for and inspiring a new generation and spawning myriad bands.

Recorded over two nights at L.A.’s Universal Amphitheatre and the Bill Graham Civic Auditorium in San Francisco in November 1999 by producer Jerry Finn, The Mark, Tom & Travis Show: The Enema Strikes Back!, released in 2000, captured the band in the midst of their meteoric rise as they enjoyed their first-ever arena tour. The high-energy set showcases songs from across their three studio albums with a focus on Enema Of The State which they were on tour supporting. A handful of songs – “Family Reunion,” “The Country Song,” “Blow Job,” – were songs made up on tour and only played at the shows. The album features one non-live track, “Man Overboard,” which was written during the Enema sessions and recorded after the tour. Released as the album’s lead single, it peaked at #2 on Billboard’s Modern Rock Tracks chart. The record debuted at number eight on the Billboard 200 chart, selling 110,000 copies its first week. The fourth side of the vinyl release, titled “Words of Wisdom,” closes out the album with 29 “skits,” examples of some of the wild between-song patter by DeLonge and Hoppus that has distinguished the band for its fans.

Blink-182’s cleverly titled fifth studio album, Take Off Your Pants and Jacket, released in 2001, continued the band’s mainstream reign and became the first punk rock album to debut in the U.S. at #1 on the Billboard 200 with first week sales of 350,000 copies. It also debuted at #1 in Canada and landed on Germany’s Top 100 Albums. Within a year it went double platinum in the U.S. and went on to sell 14 million albums globally. All three singles – “The Rock Show,” “First Date” and “Stay Together” were top 10 hits and led to national TV performances on the “Late Show With David Letterman” and “Late Night With Conan O’Brien.” The record, produced again by Jerry Finn, has been referred to as a concept album chronicling adolescence, with songs dedicated to first dates, fighting authority and teenage parties. Kerrang! ranked it #14 on its list of “The 50 Best Rock Albums of the 2000s.”

Blink-182’s eponymous fifth studio album was released in 2003 following the group’s hiatus and involvement in various side projects such as Box Car Racer and Transplants. Recorded with longtime producer Jerry Finn, the album marks a departure from their earlier work, with experimental elements creeping into their usual pop-punk sound, inspired by both fatherhood and their work away from the group. The songwriting is both more personal and explores darker terrain, touching upon the realities of maturity and hardships. The track, “All Of This,” features vocals by Robert Smith of The Cure, one of Hoppus’ musical idols and an obvious inspiration throughout the record. The album spawned four singles, including “I Miss You,” which peaked at #1 onBillboard’s Modern Rock Tracks chart, #8 in the UK and New Zealand, #13 in Australia and #21 in Ireland. The video, directed by Jonas Akerlund, has racked up more than 133 million views to date. Album opener “Feeling This” peaked at #2 on Billboard’s Modern Rock Tracks chart and was a top 20 hit in the UK and Australia.Entertainment Weekly wrote that “despite their newfound earnestness, [the band] seem incapable of pretension. And in a career littered with songs about awkward moments, their latest is a dork classic.” Slant’s gave the album four stars, stating, “Giving up the fart jokes is risky business for Blink—but Blink-182 might just be the band’s best album to date.” The album debuted at #3 on the Billboard 200 in the U.S., #1 in Canada and in the top 10 in Australia and New Zealand. It was certified double platinum in the states, eventually selling 2.6 million in the U.S. and a total of 7.5 million worldwide.

Blink-182’s sixth studio album, Neighborhoods, released in 2011, was the band’s first new music in eight years, following a six-year hiatus where each of them focused on other projects and family life. Hoppus, DeLonge and Barker were inspired to get the band back together following Barker’s near-fatal plane crash with his friend and fellow survivor DJ AM, and the premature death of their longtime producer Jerry Finn, often called “the fourth member of the band.” As a result of Finn’s death, the band produced Neighborhoodsthemselves, which would end up being DeLonge’s last album with Blink. The band worked on the album apart and got together several times to record. Each member’s influences inspired their contributions to the record and the sum resulted in a sound that recalled their individual upbringings. The album’s title stemmed from the idea that each musician brought something unique to the band much like the various neighborhoods that make up a city. The album debuted at #2 on the Billboard 200 and #1 on both the Alternative Albums and Top Rock Albums charts. All Music Guide was impressed with the band’s new, more mature direction and said it was “a different beast than any of the cheerfully snotty early Blink-182 albums, as the band picks up the gloomy thread left hanging on its eponymous 2003 album … yet it’s far better to hear Blink-182 grapple with adolescent angst via the perspective of middle age than vainly attempting to re-create their youth.” New York magazine called the record “one of those albums on which a group reunites as professionals and equals, each having gone off and collected his own interests via side projects, and then negotiates a sound that brings it all to bear: no-nonsense modern rock, serious but unpretentious, ambitious but full of the same easy hooks as ever.” The album would end up being DeLonge’s last with the band.