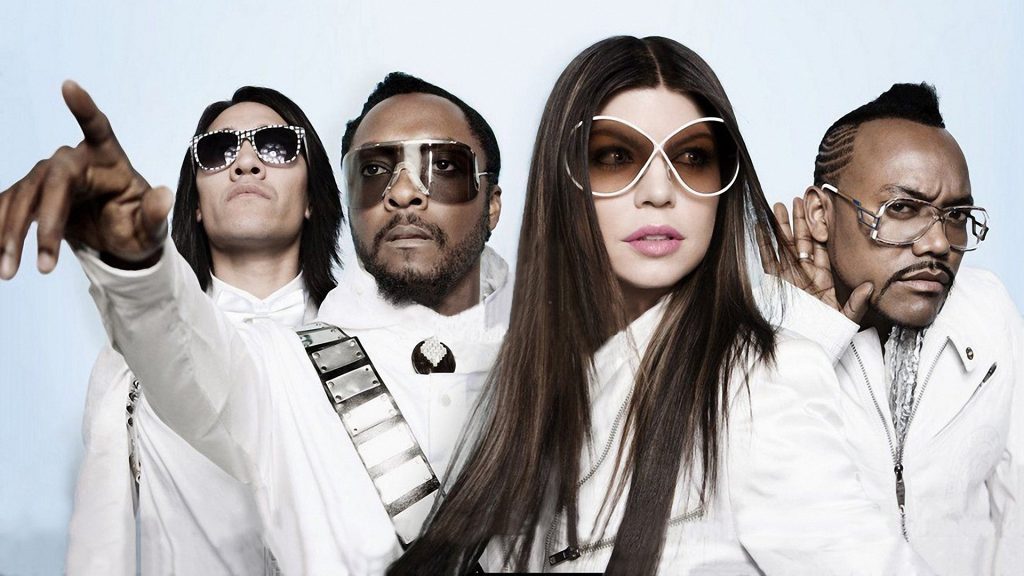 Originally formed in Los Angeles in the late ’80s by rap partners will.i.am and apl.de.ap., The Black Eyed Peas were signed to Eazy-E’s Ruthless Records, then joined Jimmy Iovine’s Interscope in 1998 for their critically acclaimed major label debut album, Behind the Front.  Since then, The Black Eyed Peas have gone on to sell more than 35 million albums around the world, emerging from the West Coast rap underground to become Grammy-winning, multi-platinum superstars who have stormed the pop charts after adding pop diva Fergie to their ranks for 2003’s breakthrough album, Elephunk, which produced their first hit single, “Where Is the Love,” “Shut Up,” “Hey Mama” and “Let’s Get It Started.”  Monkey Business, which followed in 2005, produced the hit singles, “Don’t Phunk with My Heart,” “My Humps” and “Pump It,” going triple-platinum in the U.S. and around the world, establishing the band as global pop icons. The E.N.D. (The Energy Never Dies), released in 2009, was nominated for six Grammy Awards, winning Best Pop Vocal Album, spawning the hit singles, “Boom Boom Pow” and the David Guetta-produced “I Gotta Feeling,” the latter two topping the Billboard Hot 100 back-to-back for a record-breaking 26 consecutive weeks.

UMe will now bring all six Interscope studio albums in The Black Eyed Peas’ hit-packed catalog together for the first time in The Complete Vinyl Collection, a limited edition vinyl box set that includes 180-gram double-LPs of each (for a total of 12 discs) in a black rigid lift top box, with gold foil band logo, to be released September 30. All six individual vinyl LPs will also be released separately in a limited edition run.

The band’s 1998 Interscope bow, Behind the Front, found Black Eyed Peas joined by new member Taboo.  The song, “Joints & Jam,” the album’s first official single, originally appeared on the soundtrack of the Warren Beatty movie, Bulworth, while “Be Free” appeared in the film, She’s All That.  The album’s second single was “Karma,” which was one of five music videos included on the DVD Behind the Bridge to Elephunk. Macy Gray guested on the track, “Love Won’t Wait.”

Bridging The Gap, which came out in 2000, is the last album recorded as Black Eyed Peas before the band added a “The” to their name.  There were three singles released, “BEP Empire/Get Original,” “Weekends” and “Request + Line,” the last once again featuring Macy Gray. Other cameos on the album included Esthero (“Weekends”), Chali2na (“Get Original”), Kim Hill (“Hot”), De La Soul (“Cali to New York“), Les Nubians and Mos Def (“On My Own”) and Wyclef Jean (“Rap Song”). The album peaked at #67 on the Billboard 200, while “Request + Line” climbed to #2 on the Billboard U.S. Rap chart.

Fergie joined The Black-Eyed Peas for their 2003 breakthrough, Elephunk, on will.i.am Music Group/A&M Records, which scored the band’s first crossover hit single “Where Is the Love?” which spent seven weeks at #1 in the U.K.  The album charted at #14 on the Billboard 200, was certified double-platinum by the RIAA and has since sold 3.2 million in the U.S. and 9 million copies worldwide. Allmusic praised Elephunk for “[possessing] some of the most boundary-pushing productions in contemporary (mostly) uncommercial hip-hop.”  The band later changed the lyrics to “Let’s Get Retarded,” to “Let’s Get It Started.” 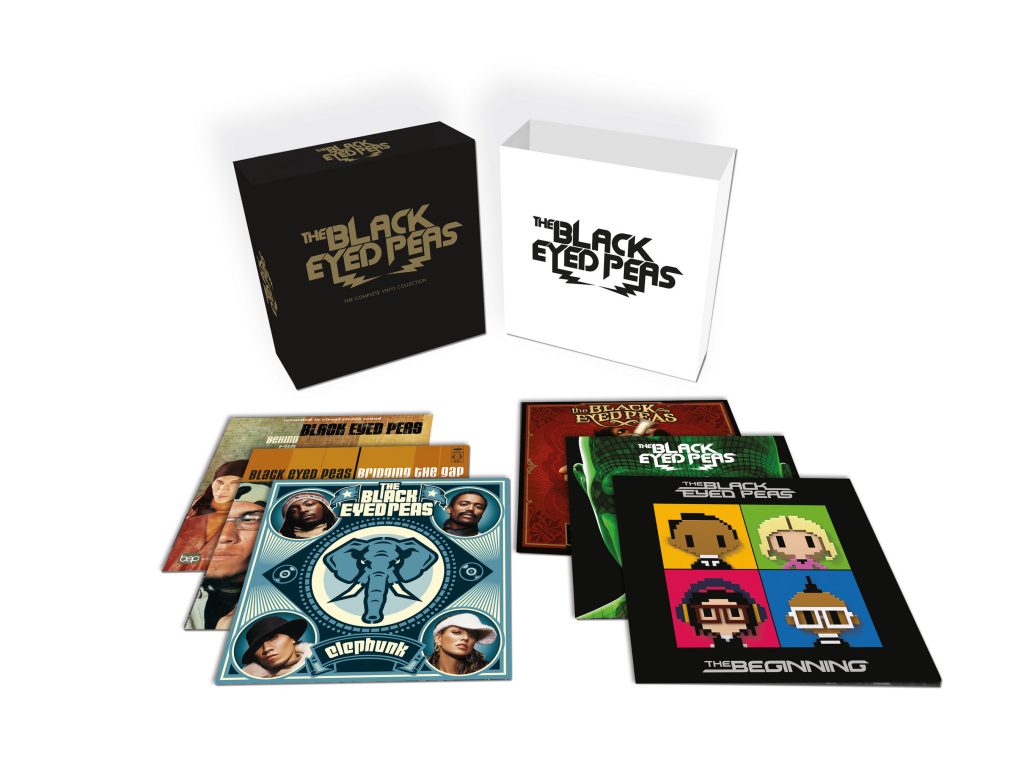 Monkey Business, the 2005 follow-up, also on will.i.am Music Group/A&M, continued the group’s momentum, earning four Grammy nominations and an award for Best Rap Performance by a Duo or Group for “Don’t Punk with My Heart,” which became the group’s first Top 5 single, reaching #3 on the Billboard Hot 100.  “My Humps” came out as the album’s third single – after “Don’t Lie,” which peaked at #14 – turning into one of the year’s top-selling songs. The album hit #3 on the Billboard 200, and sold more than 4 million in the U.S. Justin Timberlake and Timbaland guested on “My Style,” while Q-Tip, Talib Kweli, Cee Lo Green and John Legend contributed to “Like That.” Other cameos were made by Jack Johnson (“Gone Going”), James Brown (“They Don’t Want Music”) and Sting (“Union”).

The Black Eyed Peas’ fifth studio album, The E.N.D. (which stands for The Energy Never Dies), came out in June, 2009, with three promotional singles, “Imma Be,” “Alive” and “Meet Me Halfway,” released through the iTunes store in the weeks before the album’s release. The album completed the transition from hip-hop to pop and gave the group its first three chart-topping singles in “Boom Boom Pow,” “I Gotta Feeling” and “Imma Be,” topping the Billboard Hot 100 for 12, 14 and two weeks, respectively. The E.N.D. has sold more than 14.5 million copies worldwide and was nominated for six Grammy Awards, including Album of the Year (losing toTaylor Swift’s Fearless) and Record of the Year (“I Gotta Feeling”), winning for Best Pop Vocal Album. Entertainment Weekly described it as “pure Top 40 nirvana.”

Released in November, 2010, The Beginning is The Black Eyed Peas’ sixth and most recent studio album, described as a “prequel” to The E.N.D. The singles included “The Time (Dirty Bit),” “Just Can’t Get Enough” and “Don’t Stop The Party.” The album debuted on the Billboard 200 at #6. The group followed up the album release with “The Beginning Massive Stadium Tour,” which began in June 2011 in France and ended in November after a total of 20 shows. Entertainment Weekly praised the album’s “heavier electronic beats… Every song is piled high with sticky pop melodies, slick hip-hop rhythms, bright synth parts, and vocals that have been diced and processed to high heaven, all furthering the goal of maximum catchiness.”