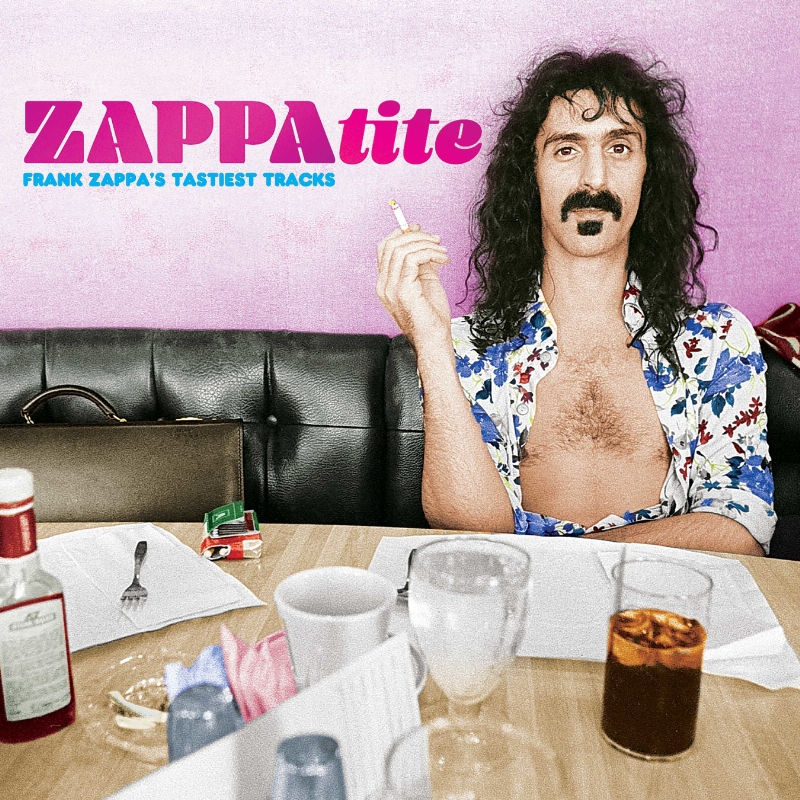 In his trailblazing and incredibly prolific career, artist, composer and all-around musical pioneer Frank Zappa released more than 60 albums in his lifetime, as a solo artist and with his bands the Mothers of Invention and the Mothers. Coupled with more than 40 posthumous releases since his death in 1993 at 52, figuring out where to start in Zappa’s vast, genre-leaping catalog can be daunting. ZAPPAtite – Frank Zappa’s Tastiest Tracks, due September 23 on Zappa Records/UMe and available for pre-order now, collects some of Zappa’s best known and beloved compositions, from his early psychedelic rock beginnings to his avant-garde experimentation, jazz-rock explorations, symphonic suites and satirical send-ups, compiling them into one easily digestible collection and offering key entryways into the many musical worlds of the visionary musician.

Available on CD and digitally, with vinyl to come at a later date, the album is divided into three courses – Appetizers, Entrees and Desserts – and the food-centric theme oozes throughout the album art, which features Zappa in a diner on the cover, a track list that resembles a menu and some of Zappa’s favorite eats. The 18 compositions that make up ZAPPAtite were compiled by Zappa’s son Ahmet Zappa and encyclopedic Zappa archivist, “Vaultmeister” Joe Travers. “This isn’t a greatest hits album as Frank didn’t really have ‘hits,’ per se, nor is it a ‘best of’ since that would be an impossibility to fit so much awesome onto one disc,” says Ahmet Zappa. “It’s a veritable smorgasbord of musicality for the curious and a buffet of favorites for the fans, ZAPPAtite collects a cross section of my favorite songs composed by my dad, that lean more towards the rock side of his expansive repertoire. I hope you’re hungry because this meal for your ears rocks!”

Kicking off with the one-two punch of “I’m The Slime” and “Dirty Love” from Zappa’s 1973 watershed Gold album, Over-Nite Sensation, the collection quickly introduces Zappa’s eclecticism and salacious tongue as the songs meld polyrhythmic psychedelic rock and heavy funk with his trademark innuendo-filled lyrics. From there, the album travels through Zappa’s sprawling musical universe, highlighting vital songs and important eras of his career. The Appetizers portion also includes the GRAMMY® -nominated disco satire “Dancin’ Fool” and the controversial European smash “Bobby Brown Goes Down” from Zappa’s popular 1979 album, Sheik Yerbouti; and “Trouble Every Day” from Zappa’s embryonic rock band the Mothers of Invention’s groundbreaking 1966 debut, Freak Out!. Entrees includes one of Zappa’s best known works, the universally loved instrumental “Peaches En Regalia from his classic 1969 solo sophomore record, Hot Rats; ubiquitous Top 40 hit “Valley Girl,” featuring his then 14-year-old daughter Moon Unit affecting a valley girl “gag-me-with-a-spoon” patois, from 1982’s Ship Arriving Too Late to Save a Drowning Witch; to the possible autobiographical track from a parallel dimension “Joe’s Garage” of 1979’s LP of the same name; and the waggish blues rocker “Cosmik Debris” and the humorous “Don’t Eat The Yellow Snow,” two standouts from one of Zappa’s most commercial and accessible albums, 1974’s Apostrophe (‘).

Desserts explores Zappa’s musical virtuosity and singular live performances and includes the comedic “Titties & Beer” from the 1978 live album, Zappa In New York; the frenetic Synclavier-fueled “G-Spot Tornado” from 1986’s Jazz From Hell; the anti-drug screed, “Cocaine Decisions” from 1983’s The Man From Utopia; and “Zoot Allures,” the heady instrumental featuring some of Zappa’s electrifying guitar playing, from 1976’s Zoot Allures. The album culminates with a performance of “Strictly Genteel” with the London Symphony Orchestra. The epic, orchestral-rock piece originally served as the grand finale to Zappa’s surrealist 1971 film, “200 Motels.”

As this year marks 50 years since the release of the Mothers of Invention’s seminal debut album, Freak Out!, hailed as one of the 500 Greatest Albums Of All Time by Rolling Stone, Zappa’s music and enduring legacy has been experiencing a renaissance as younger generations discover his music. A pair of documentaries has also brought about a renewed interest and focus on the forward-thinking iconoclast’s lasting impact. In June, Sony Pictures Classics released the feature documentary, “Eat That Question – Frank Zappa In His Own Words” to widespread acclaim. Comprised of TV interviews, performances and rare archival footage, the film reveals a provocative 20th century musical genius, rock legend and intellectual firebrand whose worldview reverberates into the present day and beyond. In April, filmmaker Alex Winter announced his plans for a documentary entitled, “Who The F*@% Is Frank Zappa,” and it quickly pushed past its goal of $500,000 to became the highest-funded documentary film in Kickstarter’s history by collecting just over $1.1 million by offering t-shirts, posters, inclusion in the film’s credits, access to never-released audio recordings, video footage, visual materials from the vault, and even the chance to purchase Zappa’s 8,000 sq. ft. Hollywood home.

Since the Zappa Family Trust and UMe entered into a global partnership for a long-term, licensing agreement encompassing Zappa’s entire recorded catalog, as well as rights management participation across the rest of the cultural icon’s creative canon, together they have been steadily reissuing the catalog on CD, LP and digitally. They have also been digging deep into Zappa’s famed vault to make available a bevy of unreleased material, live concerts and other assorted rarities.

Continuing the reissues, Zappa’s classic Hot Rats was just released on 180-gram vinyl on August 26. Recorded in 1969, his second solo album is widely known for its pioneering fusion of jazz and rock and contains one of his best known songs, “Peaches En Regalia.” Mostly an instrumental album, sans “Willie The Pimp” which features Captain Beefheart’s craggy vocals, the six-song LP is filled with complex musical passages, breathtaking playing and some beautifully melodic moments.