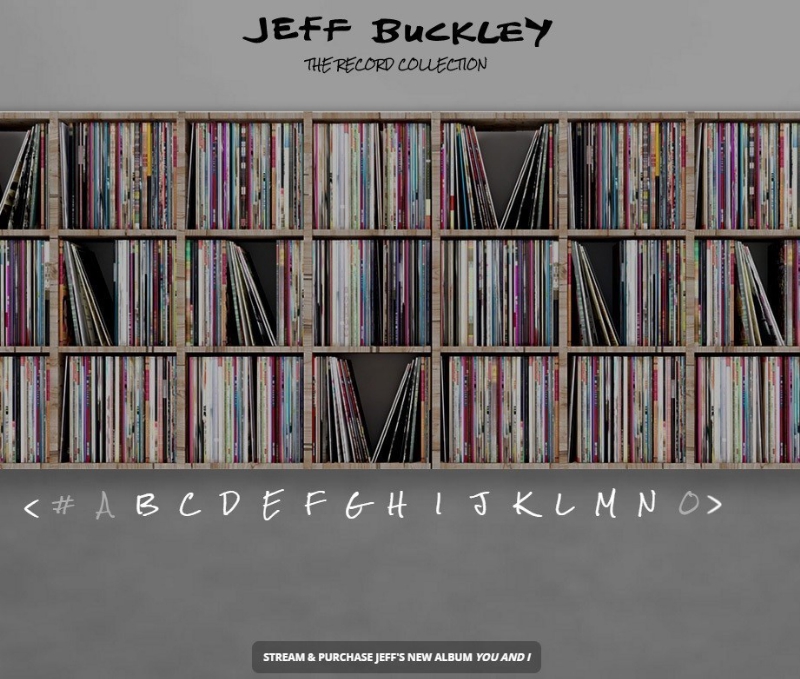 A groundbreaking and intimate online experience, Jeff Buckley’s Record Collection provides a comprehensive overview of the influences and inspirations that Jeff incorporated into his own music, including You and I, the recently-released collection of his first studio recordings from 1993, now available for streaming and purchase on the site, and Grace, Jeff’s Columbia Records debut album first released on August 23, 1994.

Now, 22 years after the release of Grace, Jeff Buckley: The Record Collection gives fans a chance to spend a summer’s day (or night) with Jeff and his music. The music press–mainstream and underground–has been enthusiastically enjoying Jeff’s Record Collection since the launch of the site on July 18. Positive recommendations have appeared in Rolling Stone, Entertainment Weekly (“The Grace singer’s tastes notoriously spanned the genre gambit.”), Billboard (“You can tell a lot about a person by what’s in their record collection. Not the MP3s in their iTunes or their coolest Spotify playlists. Their actual record collection, on vinyl and CD, with frayed edges and worn grooves, cracked cases and everything.”), Fast Company (“…when you’re talking about an artist who means as much to music as Jeff Buckley, that document is an exciting thing to be able to tour through.”), c/net (“Flip through someone’s discs, and you get a window into not only who they are but who they’ve been.”), noisey (“The guy had great taste, and you can get an intimate sense of who he was by flipping through and listening….Dig in, record nerds.”), Mashable, Consequence of Sound (“His vinyl collection…affirms the legendary songwriter’s genre-spanning taste….Those hoping to start their own vinyl collection — this is a fantastic place to start.”), American Songwriter (“….this interactive music destination is a rabbit hole of musical styles….”), Diffuser (“Jeff Buckley’s incredibly diverse taste in music….”, Goldmine (“A groundbreaking and intimate online experience….”), A.V. Club, Guitar World and more.

Like spending the day with Jeff in his apartment listening to music, the site allows fans to play and share any song from any album in Jeff’s personal collection via 30 second previews or access to Spotify for full song playback. On the site, fans can navigate through Jeff Buckley’s record collection by using arrows and the alphabet. Hovering over album spines reveal album information and the ability to stream music.