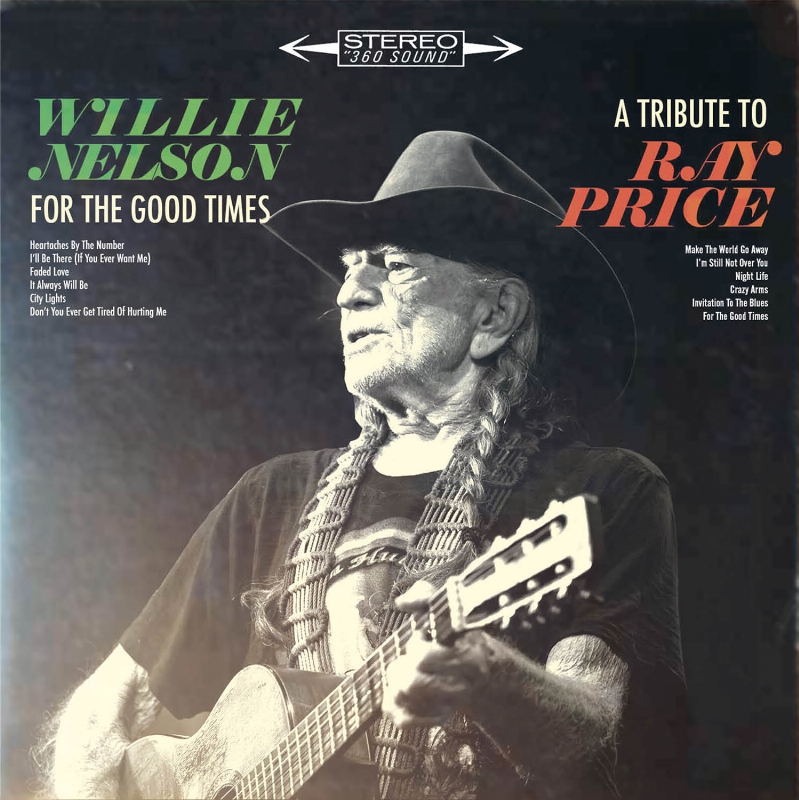 For The Good Times: A Tribute To Ray Price celebrates the wide-reaching impact and influence of Ray Priceon American pop and country music, from Price’s hallmark lush orchestral arrangements (presaging “countrypolitan”) to the patented “Ray Price Shuffle,” the groundbreaking 4/4 walking bass line which transformed honky-tonk and country-western swing music in 1950s on hits like “Crazy Arms.”

For the orchestral tracks on For The Good Times: A Tribute To Ray Price, the Nashville String Machine, a full ensemble featuring violins, violas, cellos, string basses, sax, flute and oboe, accompanies Willie.

A seminal figure in post-WWII American country music, singer/songwriter/guitarist Ray Price began his career singing on the local Abilene, Texas radio program “Hillbilly Circus” in 1948 before joining the “Big D Jamboree” in Dallas a year later.  When CBS picked up the show, Price began garnering his first national exposure.  Moving to Nashville in the early 1950s, Price became friends with country music avatar Hank Williams, going on to manage the Drifting Cowboys after Hank’s death in 1953.  That same year, Ray Price formed his own band, the Cherokee Cowboys, a country music ensemble that would employ Willie Nelson as bassist in 1961.

Friends from their first meeting until Ray Price’s passing in 2013, Willie and Ray shared a profound musical bond, exemplified in Price’s hit recordings of Willie-penned songs like the career-defining “Night Life” and “It Always Will Be.”

A visionary and iconoclastic artist, Ray Price defined and shifted the course of American country music over the course of his career.  In the 1950s and 1960s, he kept grassroots country sounds alive through the infusion of rock ‘n’ roll and pop music elements, going so far as to utilize drums at a time when the Grand Ole Opry had banned them from its stage.  By the late 1960s and early 1970s, Price became one of the godfathers of “countrypolitan,” combining lush orchestral arrangements with smooth-as-silk crooning.  Ray Price’s music connected honky-tonk to big band to rock ‘n’ roll to country swing to pop.  America’s musical landscape would look and sound very different without the contributions of Ray Price.

The profound musical relationship between Willie Nelson and Ray Price goes back to 1960, when Nelson, an aspiring singer-songwriter, moved to Nashville to further his career.  Willie’s composition, “Night Life,” becameRay Price’s theme music, the song he’d use to open his shows.  As Willie’s star rose in the country music firmament, he continued to collaborate with Price, releasing the albums San Antonio Rose (1980), Run That by Me One More Time (2003) and Last of the Breed (2007), a trio album with Merle Haggard. Ray Price made an appearance, singing “Cold War with You,” on Willie’s 2012 Legacy album Heroes.

For the Good Times: A Tribute to Ray Price debuts Willie’s new interpretations of 12 songs Price made famous, including “Heartaches by the Number,” “Crazy Arms,” “Night Life,” “Faded Love” and “For the Good Times.”

Willie Nelson – For The Good Times: A Tribute To Ray Price