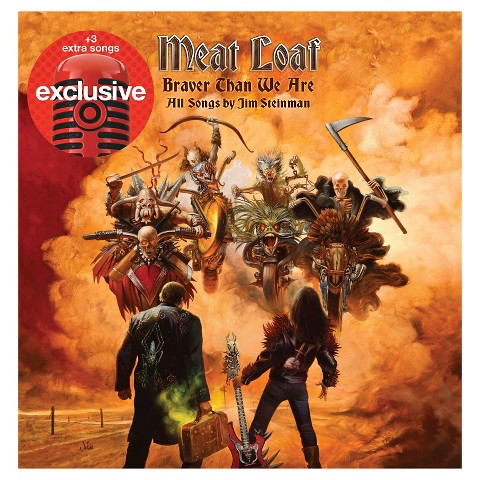 The tracks on “Braver Than We Are” were written by Steinman—featuring the first song he ever wrote in a storied career to the most recent. While Crook produced the album, Steinman acted as creative consultant throughout the recording process working alongside Paul and Meat from beginning to end sending suggestions, adding verses and contributing opinions on every aspect. The first single to radio– “Going All The Way” showcases a reunion with vocalists Ellen Foley and Karla DeVito decades after their first performances on the smash hit “Paradise by the Dashboard Light.” The single is available for purchase now at iTunes.  429 Records will release “Braver Than We Are” digitally, on CD and vinyl in Europe on September 9 and the U.S. and rest of the world on September 16.

In a career spanning over four decades, “Braver Than We Are” is Meat Loaf’s fourth album featuring songs exclusively written by Jim Steinman.”  With a painting featuring Meat and Jim together for the first time gracing the cover, the album hearkens back to the hugely successful Meat-Steinman collaborations “Bat Out of Hell” (1977) and “Bat Out of Hell II: Back Into Hell” (1993), which together sold over 67 million units.  “Braver Than We Are” is a testament to Meat’s artistic rapport with Steinman.  The songwriter’s strikingly vivid style matched with Meat’s incomparable talents not to mention his wit and grandiosity, results in the two successfully connecting with audiences on an epic scale.