RCA Records and Legacy Recordings, the catalog division of Sony Music Entertainment, will release Way Down In The Jungle Room, a definitive new 2CD collection of Elvis Presley’s last studio recordings, on Friday, August 5. The most complete and comprehensive collection of Presley’s final studio recordings ever assembled in one anthology, Way Down In The Jungle Room is an essential and welcome addition for every fan’s library. In the mid-1970s, Elvis, the King of Rock ‘n’ Roll, became another kind of pioneer as one of the world’s first major recording artists to create fully-realized professional level records in the intimacy of his own home studio. 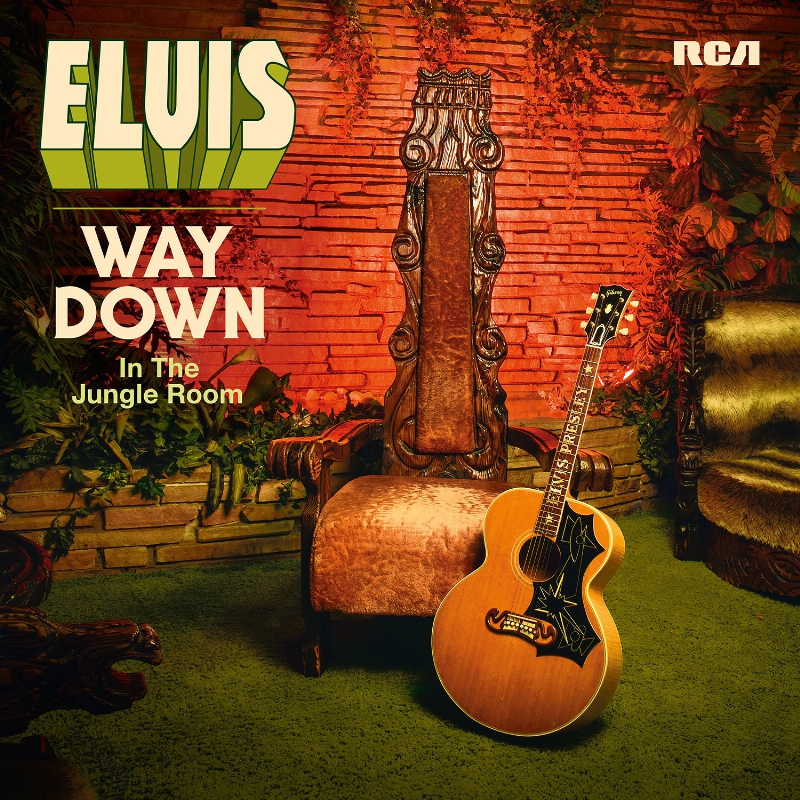 With original recordings executive-produced by Elvis Presley with producer Felton Jarvis (who’d helmed most of Elvis’ records from 1966-1977), Way Down In The Jungle Room brings together, for the first time in one collection, master recordings and rare outtakes laid down during two mythic sessions (February 2-8, 1976 and October 28-30, 1976) in Graceland’s den–known as the “Jungle Room”–which was converted into a professional caliber recording studio for the purpose of capturing these indelible performances. The outtakes have been newly mixed by Grammy Award-winning engineer Matt Ross-Spang at Sam Phillips Recording in Memphis, Tennessee.

In 1976, when the tracks for Way Down In The Jungle Room were cut, Elvis Presley had been an RCA Records recording artist for 20 years, inventing the sound and attitude that defined the very essence of rock ‘n’ roll. That same year, RCA released The Sun Sessions, the label’s first official collection of the electrifying 1954-1955 Elvis recordings that launched his career while transforming the world.

Having entered his 40s, Elvis Presley was evolving as an artist and, rather than bask in the nostalgia of his 1950s watershed recordings, was looking for new ways to express himself musically. Needing to create new sounds for a new era, Elvis Presley–who’d been charting on Country and Adult Contemporary stations–decided to convert the Hawaiian-themed “Jungle Room” (a relaxation den in his fabled Graceland mansion in Memphis, Tennessee) into an informal home studio, where he could lay down tracks the way he wanted, outside the budget and scheduling pressures of the professional studios he’d worked in previously. With the help of RCA’s mobile recording truck and longtime producer Felton Jarvis and engineer Mike Moran at the board, Elvis tackled a far-ranging mix of country and pop covers (“Blue Eyes Crying in the Rain,” “I’ll Never Fall in Love Again,” “Danny Boy,” “Solitaire”) and late-period classics of his catalog, such as “Moody Blue” and “Way Down.”

Ten of the “Jungle Room” master takes first emerged on From Elvis Presley Boulevard, Memphis, Tennessee in the spring of 1976, including the Top 10 hit “Hurt.” More tracks from these sessions were later paired with live material and released in July 1977 (a month before Elvis’ death on August 16) on the Moody Blue album. The title track would top the country charts that month; “Way Down” would follow. These were the last studio albums released during Elvis’ lifetime.

According to the album’s producers, Way Down In The Jungle Room has been resequenced to “bring a fresh perspective to the material.” The material on Disc 2 – The Outtakes was mixed for this collection at the Sam Phillips Recording Service in Memphis and includes both outtakes and in-the-studio dialog, providing a “fly-on-the-wall experience of what the sessions were like.” With the exception of track 13 (“She Thinks I Still Care”), the performances on Disc 2 have been sequenced in the order they were recorded.

Way Down In The Jungle Room with also be available on 150g 12″ vinyl in a 2LP gatefold sleeve and as a digital collection.

Elvis Presley – Way Down In The Jungle Room (2CD)

Elvis Presley – Way Down In The Jungle Room (2LP)