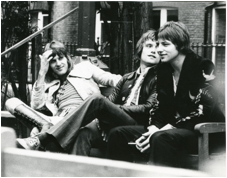 The band’s debut album ‘Emerson, Lake & Palmer’ (1970) will be available as a 2 CD set with CD 1 comprising the original album in its 2012 remastered edition. CD 2 offers an Alternate Album in a 2012 Steven Wilson stereo mix, with bonus tracks. The LP version will be the original album, newly cut for the first time from 24 Bit/HD 2012 remasters.

The Standard Digital Download will comprise the remastered 1970 album and an Alternate Album (2012 Stereo remix) with bonus tracks. The same contents will be available on MFiT and HD digital formats, all taken from the 2012 remasters.

Bartok’s ‘The Barbarian,’ together with originals ‘Take A Pebble,’ ‘Knife Edge,’ and the three part suite ‘The Three Fates’ are followed by ‘Tank’ and Greg Lake’s ballad ‘Lucky Man’ which was the band’s debut single. The Alternate album has 12 tracks peppered with bonus items notable an informal ‘Rave Up,’ a Carl Palmer ‘Drum Solo,’ and alternate versions of ‘Take A Pebble,’ ‘Knife Edge’ and ‘Lucky Man.’

The band’s second album ‘Tarkus’ (1971) saw ELP take a new direction with yet more complex keyboard sounds. The title track took up the whole of side one of the original LP, and defined the band’s exultant, bombastic approach. ‘Jeremy Bender’ ‘Bitches Crystal,’ The Only Way (Hymn)’, ‘Infinite Space (Conclusion)’, ‘A Time And A Place,’ and the rocking ‘Are You Ready Eddy?’ complete this Number One U.K. album that also shot to Number 9 in the U.S. charts.

ELP’S third album ‘Pictures At An Exhibition’ (1971) has been credited with inspiring many young musicians to embrace and study classical music. Based on the group’s enthusiastic interpretation of the famous work by Russian composer Modest Mussorgsky, it was a major hit and reached Number 3 in the U.K. and Number 10 in the U.S. album charts. ‘Pictures’ was recorded on March 21st, 1971 at Newcastle City Hall, where Emerson made use of the hall’s thunderous pipe organ.

The LP and disc 1 of the CD comprises an excellent new remaster of the ‘Pictures’ album from the original master tapes.

Disc 2 has another live performance of the extended work, recorded at the Lyceum Ballroom, London, on December 9th, 1970, complemented by live performances of ELP favourites ‘The Barbarian,’ ‘Knife Edge,’ ‘Rondo’ and ‘Nut Rocker.’

Accompanying these three albums is a special 3 CD and Download release ‘Emerson, Lake & Palmer – The Anthology.’ This superb, career-spanning set has 39 tracks from the years 1970 to 1998, the choice of material approved by all three band members. It is presented in special ‘casebound’ book packaging with detailed, informative sleeve notes by Chris Welch, illustrated with rare band photographs.

Among the highlights are the band’s performance of Copland’s ‘Hoedown’, and their version of ‘Jerusalem’ by William Blake and Hubert Parry. CD 3 includes the stirring ‘Fanfare For The Common Man,’ Keith Emerson’s hit rendition of the famed ‘Honky Tonk Train Blues,’ Greg Lake’s 1975 solo hit ‘I Believe In Father Christmas’ and the group’s menacing interpretation of the TV theme ‘Peter Gunn.’ ‘Tiger In A Spotlight’ is another live track, recorded at the group’s comeback show at the Royal Albert Hall.

Subsequent batches of important original ELP albums will be released by BMG later in 2016. They are ‘Trilogy,’ (1972), ‘Brain Salad Surgery’ (1973) and the unique triple live album ‘Welcome Back My Friends To The Show That Never Ends’ (1974).