On this week in July 1966 England were winning the World Cup. But history was also being made in Windsor where the first ever rock festival in Britain was being held. Some call it the first ever rock music festival in the world.
Now, five decades later, homage is being paid to that event. A special anniversary concert – On Track For Summer – is being held at the same venue, the Royal Windsor Racecourse, over the weekend of July 23 and July 24.

Donovan, the folk/rock troubadour who personified the sixties, comes to the Royal Windsor Racecourse this summer to celebrate the most memorable concert ever held there – and some would argue the most important turning point in British live music.

The Sunshine Superman celebrates the 50th Anniversary of the seminal 1966 National Jazz and Blues Festival with all the hits – Mellow Yellow, Hurdy Gurdy Man, Catch The Wind, Colours, Jennifer Juniper, Atlantis and many more – leading a cast of sixties originals, the people who made it all happen.

Some of the biggest hit makers of the era join forces to celebrate that special summer.

Then there’s Chris Farlowe, who had the No 1 single at the time with Out Of Time, PP Arnold with The First Cut Is The Deepest and Angel Of The Morning, Cliff Bennett with Got To Get You Into My Life, Davy O’List of The Nice with a tribute to his late band mate Keith Emerson, and The Move featuring original members Trevor Burton and Bev Bevan.

It was The Move’s single Flowers In The Rain that launched Radio 1 and they had a string of hits including I Can Hear The Grass Grow, Blackberry Way, Night Of Fear, and Fire Brigade.

Molly Marriott, the daughter of Small Faces’ front man Steve who appeared at Windsor ‘66, is there to honour her late father while one of today’s best blues singers, Beth Rowley, will play a special Christine Perfect/Fleetwood Mac influenced set to mark the day.

The casts of Sunny Afternoon and All Or Nothing also put in an appearance while host for the day is BBC Radio 2’s Alex Lester.

But why the sixties…and why now?

In 1966 there was the World Cup, London was swinging, teenagers were finding their own identity and pop culture was booming. It was a time when flower power ruled and people bought singles. Fashion, women’s rights, gay rights and the peace movement were all given a chance while the Beatles changed the world. Culture itself was changing, London was the capital of that movement and this seemed to be epitomised with this first proper rock festival.

The sixth National Jazz and Blues Festival at Windsor marked a big change. To say it was an important event would be an understatement. It was the precursor of the Isle of Wight, Glastonbury, Monterey and Woodstock.

The line up in that critical year moved from being blues and jazz to bands like The Who, the Small Faces and the Yardbirds featuring Jimmy Page and Jeff Beck. Not to mention the first unveiling of a trio with as yet no name comprising Eric, Ginger and Jack. They became world-beaters as Cream and there will be a special presentation to the one and only Ginger Baker and his family to mark this unique anniversary. As a festival it was a major innovation.

This summer concert goers are being encouraged to dress in the style of the times and be dedicated followers of a time of freedom and abandon…to make it a real 50th birthday party! 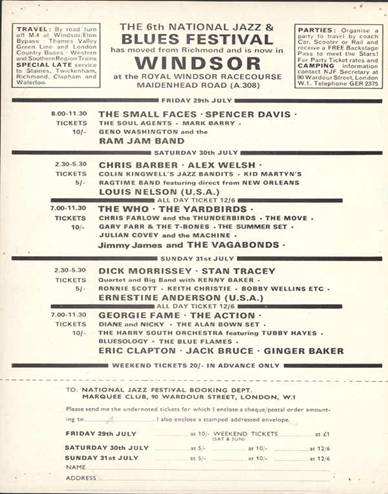 While Saturday July 23 is dedicated to the original artists who made it all happen, Sunday July 24 sees a more contemporary concert. A chance to simply enjoy and celebrate the Summer of 2016.

Featuring a host of artists including Squeeze and The Feeling alongside New York hip fusion band Quantic, Will Holland’s ultra cool combo, it’s a day to welcome in summertime. A special US Guest star has yet to be announced (for contractual reasons) but this multi platinum-selling star will be at Windsor performing his only UK festival date this year.

However, there is more to the weekend than just nostalgia, good vibes and terrific music. Funds are also being raised in support of Macmillan Cancer Support to help ensure no one faces cancer alone.

Macmillan recently hit the No 1 spot in the charts with Rick Wakeman’s version of Life on Mars. On July 23 there will be a celebrity studded tribute to Bowie topped with a presentation to the charity by 1966 World Cup winner George Cohen.

The Royal Windsor Racecourse is the perfect venue for the two-day festival, over and above the historical reasons. Catering for up to 7,500 people per day, it has dedicated car parking, a choice of transport to the venue (even chartered boat hire on the Thames from Windsor Town Centre) and all the hospitality that the Royal Racecourse offers.

Gold circle tickets are available with guaranteed picnic style seating adjacent to the stage and standing room on the grass areas alongside. They include a pass to the special artists’ bar and a commemorative programme. Other VIP packages are also available.