Five John Mellencamp albums have been scheduled for reissue on 180-gram vinyl LPs on June 10 by Mercury/UMe. New lacquers for American Fool, Uh-Huh, Scarecrow, The Lonesome Jubilee, and Big Daddy were cut from their original analog master tapes by Chris Bellman at Bernie Grundman Mastering, with the vinyl LPs manufactured by Record Industry. The albums are available now for preorder, individually and gathered in a limited edition 5-LP vinyl box set, The Vinyl Collection 1982-1989. 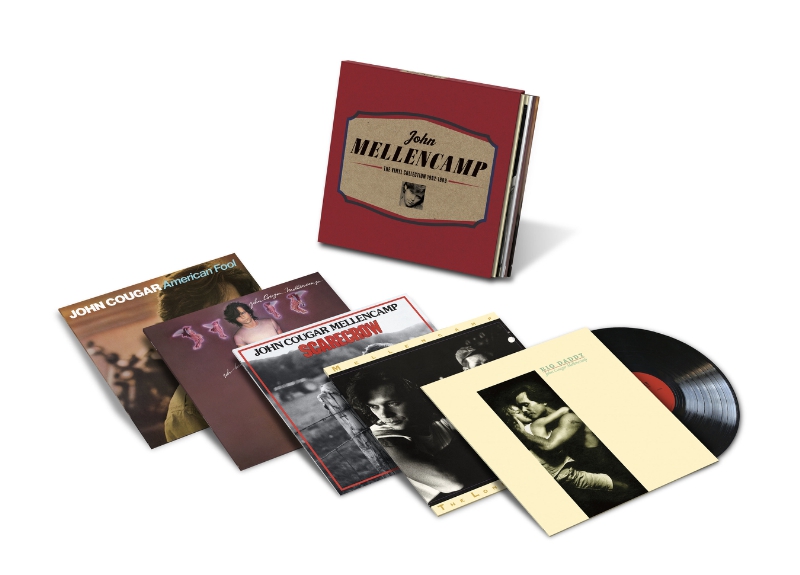 Released in 1982, John Mellencamp’s fifth album, American Fool, hit No. 1 on the Billboard 200 albums chart. Fueled by the Billboard Hot 100 chart-topper “Jack & Diane,” the GRAMMY®-winning No. 2 single “Hurts So Good,” and the Top 20 “Hand To Hold On To,” American Fool was the year’s bestselling album in the U.S. and is certified five-times platinum.

Released in 1987, The Lonesome Jubilee reached No. 6 on the Billboard 200 and features the Billboard Hot 100 Top 10s “Cherry Bomb” and “Paper In Fire.” The album is certified triple-platinum in the U.S.

Released in 1989, Big Daddy peaked at No. 7 on the Billboard 200 and features two Mainstream Rock Top 10s: “Pop Singer” and “Martha Say.” Big Daddy is certified platinum in the U.S.

John Mellencamp’s career in music, spanning more than 35 years, has seen him transition from pop star to one of the most highly regarded songwriters of a generation. The Voice of The Heartland continued to evolve artistically with Plain Spoken, John’s 22nd full-length album. Mellencamp is incredibly acclaimed. He is a member of the Rock and Roll Hall of Fame, a Grammy winner, a recipient of the John Steinbeck Award, ASCAP Foundation’s Champion Award, The Woody Guthrie Award and Americana Music Association’s Lifetime Achievement Award. He is also one of the most successful live concert performers in the world. Recently, at the 33rd annual ASCAP Pop Music Awards in Los Angeles, Mellencamp added another prize to his collection: the Founders Award, the top honor assigned by the American Society of Composers, Authors and Publishers. The social activism reflected in his songs helped catalyze Farm Aid, the concert series and organization that has addressed the struggle of American family farmers for more than 25 years. John recently completed an 80-city tour in North America and Canada that began in January 2015 and saw Mellencamp hitting 13 all-new cities. The tour will pick up its seventh leg in October this year. John continues to focus on another facet of his artistic expression: painting. His style has progressed over the years as evidenced by several gallery shows and published portfolios, and in recent years he has increased his output by completing over 100 new works. His pieces were shown in 2012 at the Tennessee State Museum in Nashville under the title “Nothing Like I Planned: The Art Of John Mellencamp” and, more recently at the Butler Institute of American Art in an exhibition entitled “The Paintings Of John Mellencamp.” “The Paintings of John Mellencamp” traveled to the Museum of Art-DeLand, Florida and John’s art was recently seen at ACA Gallery in New York. The unique instrumentation of his band and his poignant songs about everyday life in the American heartland, are widely credited with being the forbearer of the Americana/No Depression genre of rural-inflected music. An extraordinary collaboration performed by an ensemble cast of 15 actors and a four-piece live band, comprised of members of John Mellencamp’s band is The Ghost Brothers of Darkland County, a musical with music and lyrics by John Mellencamp, a libretto by author Stephen King and production by T Bone Burnett . The show is being further developed in London, with a table reading expected this year. John is currently working on a new album featuring Carlene Carter titled “Sad Clowns and Hillbillies.”