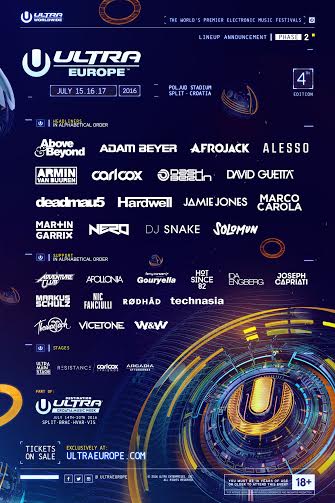 With less than two and a half months until it kicks off, Europe’s ultimate summer paradise, Destination ULTRA – Croatia Music Week, is shaping up to be one for the record books as it announces a slew of celebrated acts set to perform across the week.

The Destination ULTRA week has a real RESISTANCE™ feel to it this year, with things starting in style on Thursday, July 14 at the Giraffe Palm Beach House with a RESISTANCE™ themed Opening Party that will be headlined by UMEK and some of his 1605 Music Therapy label mates.

From July 15-17, the main event of the week, ULTRA Europe, takes over Split. The aforementioned Phase Two artists join an already stacked list of headliners that were announced for Phase One including (in alphabetical order) Above & Beyond, Adam Beyer, Afrojack, Alesso, Armin van Buuren, Carl Cox, Dash Berlin, David Guetta, Hardwell, Jamie Jones, Marco Carola, Martin Garrix, DJ Snake and Solomun, as the largest electronic festival in Croatian history looks to build ever further upon on its burgeoning reputation.

The momentous week continues with the ULTRA Yacht Regatta Party on July 18, where revelers will party at the Zlatni Rat Beach on Braç Island. Don Diablo and Robin Schulz take the reigns at ULTRA Beach the next day on July 19, with support from Sam Feldt, as Ultranauts head to the idyllic Island of Hvar. As Destination ULTRA – Croatia Music Week draws to a close, the festivities will finish on the beautiful island of Vis for the Official Resistance™ Closing Party on July 20, headlined by Hot Since 82 and Nic Fancuilli.