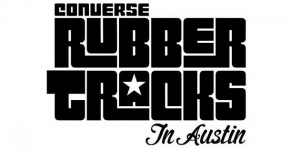 This week, CONVERSE Inc. announced its return to Austin to unleash the creative spirit during the 2014 SXSW Music and Media Conference. “Converse Rubber Tracks in Austin” pop-up studio is back for its third year, from March 3-15, offering Texas-based bands the opportunity to record original music alongside experienced engineers at no cost. Due to the success of Converse Rubber Tracks in Austin, SXSW is presenting a panel discussion on Friday, March 14 entitled “Converse Rubber Tracks: No Strings Attached” that will explore Converse’s commitment to providing platforms to support emerging artists. This year also marks the debut of “Converse Rubber Tracks Live” in Austin, which will present a free concert on March 15. In addition, Converse will bring skate, hip-hop and metal cultures together once again at the “Converse X Thrasher Magazine Death Match” March 12-15. Converse is also returning as the presenting sponsor of “The FADER FORT Presented by Converse”, the annual 4-day event in Austin from March 12-15.

“We’re so proud to be back in Austin,” said Geoff Cottrill, VP/GM of Brand & Segments at Converse. “Each year we discover new artists who are incredibly talented and driven—but simply need a little support. We’re really excited to be able to give musicians the opportunity to record for free and a platform to unleash their creative spirit.”

“Converse Rubber Tracks: No Strings Attached” Panel at SXSW
Converse Rubber Tracks has been embraced by artists and music communities around the globe, including New York, Los Angeles, San Francisco and Austin to name a few, who have benefitted from this unique opportunity. With its success, SXSW has dedicated a panel discussion on Friday, March 14 entitled “Converse Rubber Tracks: No Strings Attached.” The panel will discuss Converse’s connection to music and commitment to unleashing the creative spirit by providing platforms that help emerging artists. The panel will be moderated by acclaimed advertising Music Director, Gabe McDonough and will feature Geoff Cottrill (Converse VP/GM of Brand & Segments) and emerging artists Whalers (Austin, Texas).