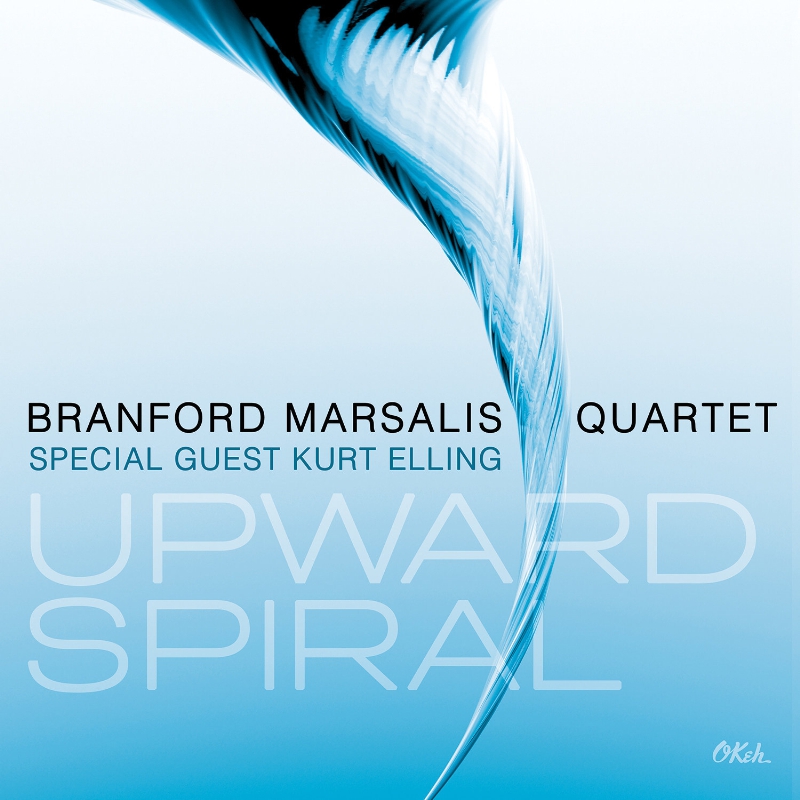 It is no secret that the Branford Marsalis Quartet can be as freewheeling off the bandstand as in performance. Saxophonist Marsalis, and his Quartet made up of pianist Joey Calderazzo, bassist Eric Revis and drummer Justin Faulkner are each bold personalities with strong opinions, equally intense in both musical and verbal exchanges. “The band talks about all kinds of things, many of which are unprintable,” Marsalis admits. “But we have serious musical debates as well.” One of these exchanges led to Upward Spiral, the new album from the Branford Marsalis Quartet with special guest Kurt Elling. The album will be released via Marsalis Music via OKeh Records on June 10, 2016.

“One topic we got into was picking the best singer to work with our band,” Marsalis recalls. “My candidate was Kurt Elling, because he has the most flexible voice around, is always in tune and is a true jazz musician. When I met Kurt two years ago at a Thelonious Monk Institute competition, we had a conversation at the bar about doing a record together.”

“I had bumped into Branford on the road a handful of times, and we always had significant conversations,” Elling adds. “So when he mentioned making a record, I said ‘any time!'”

What has emerged, after an intense week of performance and recording in New Orleans, is a collection that blends Songbook staples, jazz standards, and standards-to-be from a diverse array of composers.

The goal from the outset was to create a true partnership. “I usually reject the word `collaboration,'” Marsalis explains, “because it implies a third thing from that which each collaborator does well. I don’t need a collaborator to do what I normally do, and Kurt doesn’t, either. But this time, none of us were going to do what we normally do. The goal here, even though he sings lyrics, was to highlight Kurt’s voice as an instrument.”

Elling was more than prepared for the challenge. “I love singing with a hard-hitting band,” he confirms. “I didn’t want Branford’s band to feel that it had to hold back because a singer was there. To be welcomed into the Quartet’s circle, which is all about new challenges and hard blowing, was very important to me. When I asked Branford what to bring about a week before the date, he said `Don’t worry, you’ve got the thing.’ So I brought `the thing.'”

Choosing songs became a process in which all five musicians had input. “Everyone in the band is always listening to all kinds of music,” Marsalis emphasizes, “so it’s not as if we had to go out and do research on vocal records.

“For example, I had been listening to the Oscar Brown song `Long as You’re Living’ for two years before the date. The first time I heard Sting’s `Practical Arrangement,’ I called him and asked for a lead sheet, because I wanted to play that song with the quartet even before the idea of recording with Kurt came up. I also chose `Só Tinha de Ser Com Você,’ a Jobim song that has not been done to death. I told everyone to study Elis Regina’s version, because I wanted us to sound authentic rather than generic. Doing `Blue Gardenia’ was my idea, while Eric originally suggested Chris Whitley’s `From One Island’ when we were talking about more recent songs.

Elling also brought ideas and songs to the partnership. He suggested “Doxy,” the Sonny Rollins classic with lyrics that Mark Murphy introduced; “West Virginia Rose,” with music and lyrics by pianist Fred Hersch; and “Momma Said,” with the quartet responding spontaneously in the studio to the Calvin Forbes poem.

Two classic ballad performances complete the collection. “Kurt had wanted to do `Blue Velvet,’ using Bobby Vinton’s hit version as a starting point,” Marsalis recalls. “I said that I’d write it out, but Kurt said, `No, I want us to sound like ghosts, with just enough technique to get the message across.’ He also wanted to do a voice/tenor duet, which I was originally against, but we tried `I’m a Fool to Want You’ and he was right. When you have a singer who can inhabit the emotional space, it works.”

Every track on Upward Spiral confirms the beyond-category strengths of both the Quartet and Elling. “No one in the band had to make adjustments, because good musicians can play many styles of music,” Marsalis notes. “We’re fully engaged with one another when we’re playing, so it was easy to engage with Kurt. The only adjustment was not to play long solos, but if making the music sound good means playing less, you play less.”

Elling adds that “My thing is always about tailoring what I do to the vision and personality of the band, and Branford’s quartet is a real working band, which is both an incredible luxury and incredibly important for the music. They provided everything on a silver platter.”

For Marsalis, Upward Spiral is consistent with all of his previous music. “My philosophy of jazz is that it should be about strong melodies and a great beat, and every song here has a melody that you can hold in your mind, that you can sing. This is not jazz as a personal think tank, where people are only concerned with impressing everyone already inside of the tank with deconstruction and reharmonization. This is the kind of music that should expand our base to include people who would like jazz if it were friendlier. From the minute Kurt started performing with us, it was all good.”