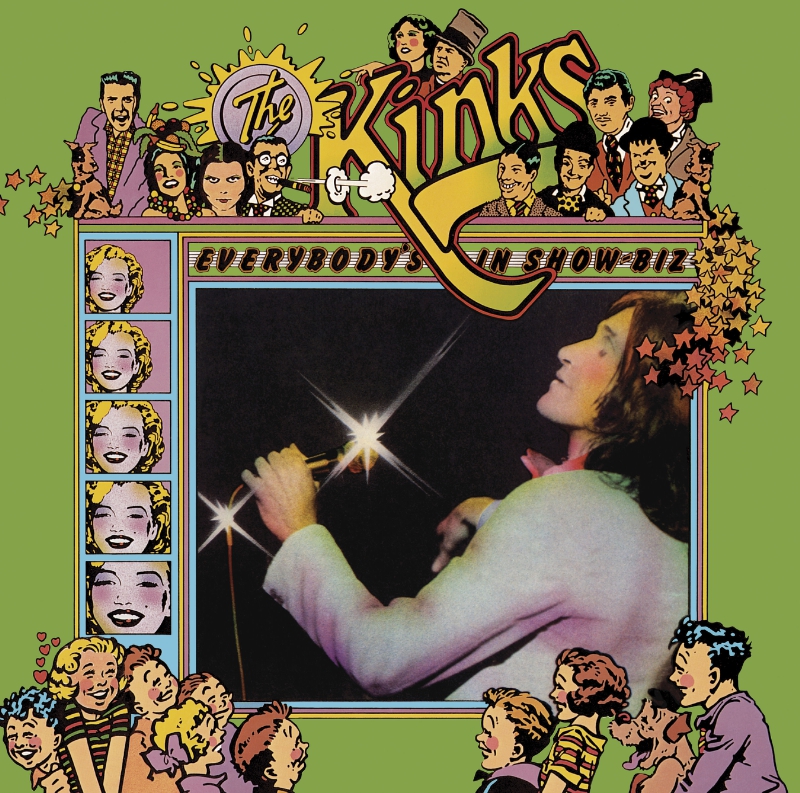 RCA/Legacy Recordings, the catalog division of Sony Music Entertainment, will release a newly expanded edition of Everybody’s In Show-Biz, The Kinks’ 1972 album masterpiece, on Friday, June 3.

First released in August 1972, Everybody’s In Show-Biz was The Kinks’ tenth studio album, arriving within a year of the acclaimed Muswell Hillbillies (the group’s debut album for RCA Records). The original double-LP Everybody’s In Show-Biz contained a complete studio album (which premiered the all-time Kinks classic “Celluloid Heroes” among other tracks) and a live disc chronicling The Kinks’ Carnegie Hall appearance in March 1972.

The 2016 Legacy Edition of Everybody’s In Show-Biz includes the original album, produced by Raymond Douglas Davies, in its entirety alongside a full disc’s worth of previously unissued studio sessions outtakes (recorded for the album in 1972 at Morgan Studios, Willesden, London) and live material (recorded March 2-3, 1972 during The Kinks’ triumphant Carnegie Hall concert run).

A concept album of sorts, Everybody’s In Show-Biz drew its themes and inspirations from the trials, tribulations and triumphs of life as a touring musician. (The raucous Carnegie Hall recordings on the album come from one of the first North American concerts performed by The Kinks after the lift of a four-year ban imposed on the group by the American Federation of Musicians in 1965.) The songs on Everybody’s In Show-Biz were initially intended to serve as the soundtrack to The Colossal Shirt, a never-realized feature film about The Kinks on the road.

The Carnegie Hall recordings include a variety of Kinks originals in addition to unconventional covers including “Mr. Wonderful” (from the Sammy Davis Jr.-led musical of the same name), the 1920s popular standard “Baby Face” (made famous by Al Jolson) and “The Banana Boat Song” (a calypso-folk perennial popularized by Harry Belafonte).

The new Legacy Edition of Everybody’s In Show-Biz includes never-before-heard live versions of “Sunny Afternoon,” “Get Back in Line,” “Complicated Life” and the rarely-played “Long Tall Shorty” as well as alternate versions of “Supersonic Rocket Ship,” “Unreal Reality” and the debut release of “History,” which foreshadowed The Kinks’ next concept album, 1973’s Preservation Act 1.