Elton rocks. He’s been around a long time, sold hundreds of millions of records, written songs the whole world sings, but for his 32nd studio album Elton John has shaken things up a bit. This time around, he brought his touring band into the studio and plugged the amps in. “This is a raucous rock’n’roll record,” says Elton of Wonderful Crazy Night. “I wanted a guitar record, I wanted something joyous, something you can play in arenas. I don’t think I have ever made such an uptempo, energetic album. It just bangs away!” 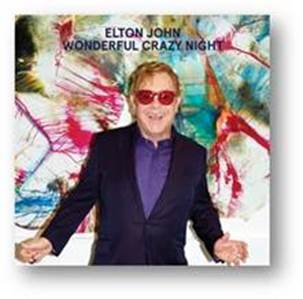 Wonderful Crazy Night features everything you would expect from an Elton John album. Poetic, powerful lyrics. Flowing, grandstanding melodies. Fantastic, soulful singing. But there is an added zip to proceedings, a live and spontaneous spirit set to make it another landmark in an extraordinary catalogue. “With this album, I’ve really reached back to being the Elton of the Seventies,” he says. “I’m at a point in my life where everything is falling into place. I’m really happy! And of course this is going to be reflected in the feel of this album”.

The album was written and recorded in just 17 days, co-produced with revered Americana legend T Bone Burnett (a veteran of sessions with BB King, Willie Nelson, Robert Plant and Alison Krauss). Core band members convened at venerable Village studio in LA. “It was very much the same way we made Yellow Brick Road or Honky Chateau in the Seventies,” explains Elton. “I’d go in there and write the song in the morning, the band would come in and learn the chords, we’d run it through a couple of times and put it down straight away.”

Drummer Nigel Olsson played in Elton’s original 3-piece group. Guitarist Davey Johnstone has worked with Elton since 1971. Bassist Matt Bissonette, keyboard player Kim Bullard and percussionist John Mahon are more recent recruits to Elton’s spectacular live band. Long-time friend and collaborator, percussionist Ray Cooper, joined for five tracks. “I feel it’s probably the best band I’ve ever had, something just clicked,” says Elton. “I’m a good musician, and my band are very good musicians, and it is so great to be able to do the one take thing. You can tell the fun we had making this record.”

Lyrics, once again, have been supplied by Bernie Taupin, in what is almost certainly the longest serving working songwriting partnership in popular music. Over 48 years they have written hundreds of songs together, scoring over 50 global smash hit singles, including the biggest selling single of all time, Candle In The Wind 1997. And now here are ten more gems to add to the canon, including tender, uplifting ballad Good Heart, rip roaring romp Guilty Pleasure, elegantly joyous Blue Wonderful, widescreen epic Open Chord and the exuberant title track, Wonderful Crazy Night. “We never write in the same room together,” says Elton, who cherishes the mysterious synchronicity of their extraordinary partnership. “It’s the same excitement now as it was when we first started. I don’t want to see the lyrics before I go in the studio, I sit down at the piano, there’s the joy of seeing something for the first time, it just hits you, suddenly a film starts in your head, you play a chord sequence and it unfolds from there. I don’t know why. I just respond to his lyrics.”

For this album, Elton says “I said to Bernie I want joyous lyrics. Even the slow songs have to be joyous. I am at a place in my life where I am very happy. I wanted to make a joyous record.” Wonderful Crazy Night is Elton’s third album with producer T Bone Burnett, following The Union (with Leon Russell) in 2010 and The Diving Board in 2013 (both of which were top 5 in America). “All my albums with T Bone have been very different. The Union is pure Americana. The Diving Board is my most intimate record and probably my best piano playing. And this one is rock’n’roll.” Elton wanted songs he could slip into his live sets alongside belters like Crocodile Rock, Saturday Night’s Alright (For Fighting) and Bennie And The Jets. “Musically, it’s a very energetic record, which I am very proud of, because I am actually still full of energy. Of all the albums I’ve made in the last thirty years, this one should be the easiest to play live.”

Elton John’s record stands for itself. He has worldwide sales of over 250 million. He has 58 Billboard Top 40 singles in the United States. He has written the music for the stage and screen successes Billy Elliot: The Musical, Elton John & Tim Rice’s Aida and Disney’s cinematic and theatrical sensation The Lion King. A tireless live performer, Elton has played more than 3,500 concerts in over 80 countries. He has collected 12 Ivor Novello Awards, six Grammys, two Brits, an Oscar and a Tony. He has been inducted into the Rock and Roll Hall of Fame, The Songwriters Hall of Fame and received a knighthood from HM Queen Elizabeth II in 1998. He is a tireless charitable campaigner and philanthropist, notoriously outspoken for the causes he believes in. Sir Elton John is an undisputed pop culture legend. And that is why it is even more impressive that he is not content to rest on his laurels.
Elton is still pushing himself creatively, trying to make music that excites himself as much as listeners. “I’m not retiring,” he insists. “I’m having more fun now than I’ve ever done. I love my band. I love playing live. I’m 68 and I feel as if I’m in the prime of my life.”