Perhaps Syria’s most successful musical export, international singer Omar Souleyman has returned with his second proper studio effort and most personal album to date, ‘Bahdeni Nami’, coming this July from Monkeytown Records. For the new album Omar opened his doors to collaborations with a number of renowned electronic producers, all of whom were established fans keen to offer unique interpretations of Souleyman’s established sound. Four Tet returns to produce a track, Gilles Peterson lends his considerable talents to one song, Modeselektor turn in the two fastest dance numbers of the set, and Legowelt offers a remix for the title track. Additionally Black Lips’ Cole Alexander treats one of the heart-wounding ballads to a thoroughly distinctive remix that will appear on a 7” in August. 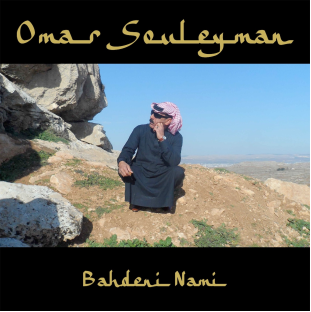 The new album was recorded closer to home, in Istanbul, and appropriately the singer is joined by traditional accompaniment. Souleyman has reunited with his favorite poet, Ahmad Alsamer (who penned his pre-west hits ‘Kaset Hanzel’, ‘Khattaba’, and ‘Shift –al Mani’), heard throughout the album offering claps and wails of encouragement. The songs come alive with musical contributions and support from the virtuosic saz work of Khaled Youssef, another long time collaborator from his hometown. Keyboards by Rizan Said improvise devotedly to every tune and turn of Souleyman’s choice. The lyrics are familiar territory for the singer – declarations of eternal love, consolation of one’s aching heart, pleas to his lover to sleep in his arms forever – realized as four fast dance numbers, an introduction mawal, and an elaborate araby style ballad.

Omar Souleyman continues to tirelessly bring his wild dance party to all corners of the world, everywhere from SXSW to the Nobel Peace Prize Concert to rock clubs in cities around the world. Originating from the Hasake region of Syria, Omar earned his reputation by singing and leading years of weddings, birthdays, Christenings, corporate parties and more, answering invites from all peoples living in the region – be it Muslims, Christians, Kurds, Iraqis, Syriacs, Assyrians. Those parties yielded hundreds of cassette tapes at first offered as gifts and later distributed throughout the region and other Arab countries. Despite world’s insistence to associate him with his home country’s unending war, Omar gives back nothing but Love.