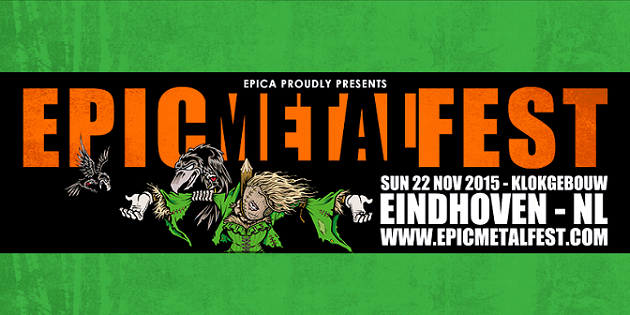 Epica is proud to present their very own festival Epic Metal Fest. This event will take place on the 22nd November 2015 at ‘Klokgebouw’ in Rockcity Eindhoven, in the Netherlands. It will see Epica headline and joined by some killer befriended bands: Eluveitie (CH), Fear Factory (US), Moonspell (PT), Delain (NL) en Periphery (US) and more bands to be announced.

This will be the party of the year, the ultimate Dutch show they will do before entering the studio to record the follow-up for “The Quantum Enigma”. You really don’t want to miss this!

Epica did play before at the monumental Eindhovens Klokgebouw. In March 2013 the band celebrated their 10 years in epic way through a marvelous Retrospect-show together with the 70-piece Hongarian choir and symphony-orchestra and great audiovisual special effects. The show received 4500 visitors out of 40 different countries  and was sold out long before the show started. This show became Epica’s first official live-DVD/Blu-Ray.