B.B. King, one of the biggest blueslegends ever, died. The bluesguitarplayer and singer was sick for a long time, suffering diabetes. A couple of week ago B.B. King left the hospital after being treated for exhaustion, caused by his diabetes. The legend died at home, peacefully in his sleep. 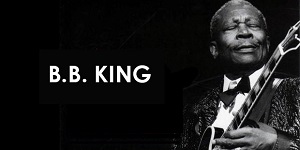 B.B. King was born september 16 1925 as Riley Ben King. He became known as the Blues Boy King and is No. 17 in Gibson’s ‘Top 50 Guitarists of All Time’. King was widely regarded as one of the most influential blues guitarists of all time, inspiring countless other electric blues and blues rock guitarists, like Eric Clapton and Jimmy Hendrix. He was inducted into the Hollywood Bowl Hall of Fame, The Blues Foundation Hall of Fame, The Rock & Roll Hall of Fame and received 15 Grammy Awards. B.B. King died 89 years old in his house in Las Vegas.