Emerging a few years ago from the local metal/rock scene and skate street culture, Parisian metal/southern-rock Churchill has just unveiled a first official music video for the single “Replay”, available right now on YouTube / by clicking on the artwork below. The song will feature the debut full-length album by the band, called “Ravage” and expected in the next weeks on Cd and digital formats. 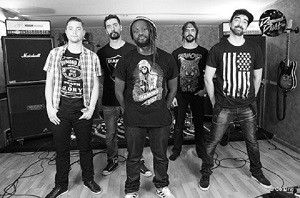 Formed at the end of 2010 under the moniker of Churchill by ex-members from various metal french outfits such as Ghost Orchid or Switch Off, this French five-piece band plays a mixture between alternative rock/metal/punk, burnin’ southern-rock and the spirit of skate street culture. After some powerful live performances at Triel Open Air, Briz Glace or Mosaik…, the band released a debut self-titled EP (2011) and then began the writing process of its first album. In 2015, after playing a bunch of gigs all around the French territory, Churchill releases “Ravage”.