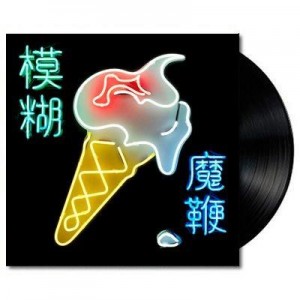 Blur no longer sits on the Britpop throne, but will survive for years. On februari 19th the world stopped for many Blur fans among the world, their beloved band announced a comback and globally it was the talk of the week. A new record that numorous times was asked about in interviews, was according to frontman Damon Albarn lying on the shelf gathering dust. After years it is finally time to be released.

‘Magic Whip’ is recorded in the smallest and hottest studio and inspired by the live in Hong Kong. In 2013 Blur stranded for 5 extra days in China when a festival in Japan got cancelled, the men took shelter in the Avon Studios in Hong Kong. At the end of last year Albarn gave Grahm Coxon permission to continue with this record. After the solotour in Australia Albarn made a pitstop in Hong Kong for lyrical inspiration. The record was finished at the end of januari 2015, mixed in februari and will be in stores april 27th.

Britpop or political statement:
Blur is the founder of what we know as Britpop, but with ‘Magic Whip’ they take a whole different direction.
What’s more, the carefree, happy and typical English activities are rare on this record. The opening track ‘Lonesome Street’ and wonderfull singalong ‘Ong Ong’ halfway the record are the only tracks you can call Britpop.
Especially the track ‘Pyong Yang’ and ‘There Are Too Many Of Us’ are packed with political statements. It is clearly that the situations in the world nowadays is very troublesome for the frontman, he has a lot of criticism in his lyrics.

Career growth of sounds scraped together:
There are a lot of years between the last record en the new ‘Magic Whip’ record. Therefore change is inevitable, the soloprojects, making cheese, activism and most of all life experience. All of these expierences apart from the cheese making are influencing the sounds on this new record, although we can hear some direct copies.
The track ‘My Terracotta Heart’ resembles a lot of Damon’s solorecord ‘Hollow Ponds’. The lyric melodie of ‘Thought I Was A Spaceman’ ‘ seems to be adopted from the solotrack ‘Hostiles’. Luckily the way the men make music together hasn’t changed after all these years.

Comeback or the end of an era:
We havent heard anything of Blur since 2003 apart from the single ‘Under the Westway’ that was released in 2012.
The recordings of the last record ‘ThinkThank’ was completed without gitarist Graham Coxon so it was surprising that it was Coxon who was so eager to finish ‘Magic Whip’. Coxon coudn’t cope with the fact that he did not cooperated with the last record (or with that his name wasn’t on the cover) and wanted to end the Blur era in the correct way. Shoud we see this record as a “Comeback”? If we can believe the statements made during the press conference this comback will also be the end of Blur. Unfortunately ‘Magic Whip’ will be the last studio record.

In conlusion:
The gentlemen outgrown the Britpop genre and have swaped the cheerfullness for a heavier record with political statements. Did we rather see that blur make another funny, sarcastic record about the average Brit of about the luxory lifestyle of the Royals? I think that Blur made the right switch and growth, they made a record that will really stand out especially in the current society. It is a shame that they announced that this will be their last record, because in this direction they could continue for years.