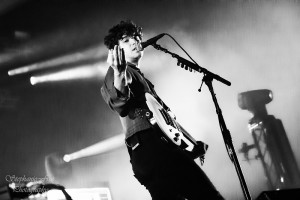 It is a great evening for Dutch band Sunday Sun, because they get to open for The Kooks. They stand all togther in one line. First Jan Teertstra on Bass, I quote “He looks like a professor, but a cute one”. Next to him is Yoshi Breen on electric guitar, Koen-Willem Toering also on electric guitar and Nicky Hustinx on drums. The guitar players all play keys aswell and all three sing. ‘Come On Down’ is an instand dance hit and the second song ‘I Saw You With Another Guy’ has a sixites popsound with surprising changes making it a super fun song. ‘Sunday Moring’ is yet again a catchy song that everybody can sing along even if it is the first time you here it. They don’t need backing vocals, that job is for the audience.

‘I Call You Honey’ is a hit right now in the Netherlands so we all singalong. The men ask for a little help with the last song. We are asked to act as if The Kooks come on stage, screem and cheer as loud as we can. Well we Dutchies love to help and the whole HMH goes mental. They di dan awesome job and hopefully Sunday Sun will headline in a big venue as this in the near future.

After a long wait The Kooks are finaly back on tour through Europe and their first gig is in Amsterdam. Although the venue isn’t sold out the HMH is packt and there are even fans that came all the way from Germany. They start the evening with the first song of Listen what came out September last year. ‘Around Town’ is a great starter, this hit helps everybody to get loose and dance. The second song is intantly recognised, not that strange because it is one of their biggest hits of the first album ‘See The World’.

The audience is doing a great job singing along with ‘Ooh La’ whitch receives a Thank you from Pritchard. Prior to ‘It Was London’ Pritchard speaks to his audience “We don’t know what life is, but it’s great to be alive innit?” Not a word lied, life is great when you are having fun and that is something the men so obviously show us. This is the first show of the european tour after Australia and it shows that they had a little break. Luke Pritchard pronunciation is good, where he can mumble on festivals and doesn’t finish his words we can now follow everything he is saying. But the best thing to see is that the have fun on stage. Pritchard often stands with the other bandmembers and shows off with his awkward dancemooves. Where they would seem weird on others it just suits him, hipthrusts, bootyshaking, flapping arms and shaky legs he doesn’t mind how he looks on stage.

We get to see all these mooves in the nest song that according to the singer we all know. And yes indeed, we all sing along with ‘Bad Habit’. This song also gives the opportunity for Peter Denton and Hugh Harris to switch places, when on stage you of course want to see the other side of the audience. Back on their own place the maraca appear for ‘Down’. For many among us who can’t stand still an awesome song. All elements of the track work, catchy gitarplay, great bassline and even the drum sounds funky. The long intermezzo isn’t that annoying at all.

It is time for an old song and as Pritchard says “We know you got beautiful voices, so help yourself”. This invite to sing-along ia happily accepted and everybody goes wild to ‘She Mooves In Her Own Way’. There is a wonderful transition to ‘Eddies Gun’ after which the band get’s a little break. Solo with an acoustic guitar we hear a gorgeous version of ‘Seaside’. The audience take it all in and there are even some tears.

“I like to play an acoustic version of a song of our last album, Dreams.” For the first time the HMH is completely quiet, if it is because not everyone knows this song or because it is a beautiful song, the audience loves it.

The whole band get’s back on stage and it is obvious they all like to play this song. ‘Westside’is started with a massive bassdrum, the mikestand is set aside because it is time to dance. After this we are asked if we are ready. And ready we are. ‘Sweet Emotion’ is recognised right away, just as the next song ‘See Tthe Sun’. ‘Sofa Song’ is just as the other songs from the first record a hit that makes everybody jump.

“How are you feeling? I’m feeling a bit depressed. Nah, I’m only joking” jokes Luke “I feeling fucking great!” It is the last song before the break. ‘Forgive & Forget’ makes the hips moove and Pritchard runs all over the stage to make contact with everybody in the audience.

For the first time we see the singer behind the piano fora n emotional ‘See Me Now’, the song he wrote for his dad. We can see that this song still mooves him and undoubtedly some in the audience, me aswell that has to wipe away a couple of tears. Halveway trough the song the band joins in and makes it fuller. During ‘Junk Of The Heart (Happy)’ notes are held up in the air with the tekst: You sure make us feel happy and alive! This is the only song of the alum Junk Of The Heart but according to the audience a song that was a must play, everybody goes wild.

“You are beautiful, always a pleasure being here! We have been The Kooks, see you soon!” and with the ultimate jumpsong the evening is ended, ‘Naive’.

All in all it was a very succesfull night. The band was excited and translated this to a perfectly played set, interaction with the audience and crazy dancemooves. The lights weren’t that spactacular, but the 7 screens on stage made up for that. The images corresponded to the songs and where needed Luke was on screen. 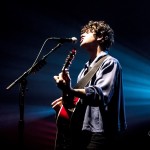 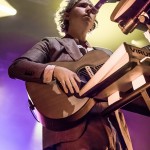 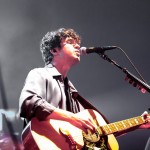 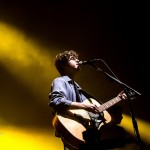 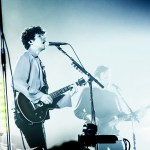 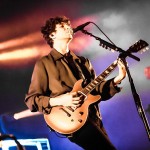 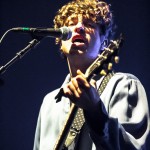 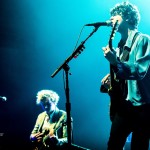 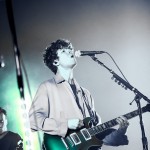 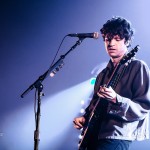 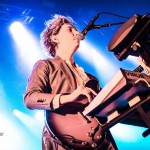 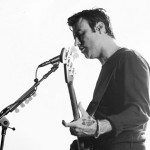 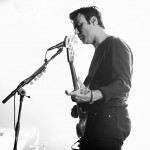