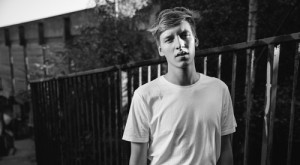 Wanted on Voyage, the anticipated debut album from breakout UK singer/songwriter and guitarist George Ezra, will officially be released in the U.S. on January 27th, 2015 via Columbia Records. The album will be available both digitally and physically, with a special deluxe version containing three additional tracks available exclusively at iTunes. Pre-ordering fans will receive George Ezra’s charming, catchy single “Budapest” immediately upon purchase. As an added bonus, there will be three additional instant grat tracks unlocking throughout the course of the pre-order.

Having already infiltrated the states, “Budapest” has quickly won over fans and garnered fantastic critical praise and accolades, such as being featured as iTunes’ coveted Single of the Week and garnering nearly 86million+ Spotify streams. Starting with SiriusXM across several channels, George Ezra’s “Budapest” has been a mainstay across multiple radio platforms, having spent its fifth consecutive week at #1 at Triple A radio. Additionally, it is approaching Top 20 at Alternative and is approaching Top 30 at Adult Top 40 Chart.

George will make his US television debut with a performance of “Budapest” on ABC’s Jimmy Kimmel Live! on Wednesday, December 17th. Fans should check their local television listings for details.

Already released to critical acclaims in Europe, Wanted on Voyage debuted at #3 in George’s native United Kingdom on July 7th and recently sat at #1 in the UK for two consecutive weeks. The album has spent a total of an incredible 24 consecutive weeks in the Top Ten and has sold over half a million copies since its release.

To celebrate the album’s release, George Ezra will take to the road across North America for the majority of Spring 2015, beginning with a tour with Sam Smith, followed by a tour with label-mate Hozier and concluding with his first-ever North American headline tour. Tickets for all dates for all tours are currently on sale; fans can check with local box offices for availability and pricing. The Sam Smith tour dates kick off January 9th in Atlanta; the Hozier tour dates begin on February 2nd in Toronto and George’s headline tour will round out his touring beginning on March 24th.