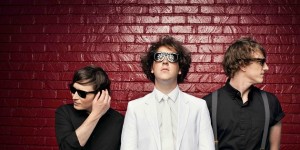 Next wednesday is the premiere of the long waited for single ‘Greek Tragedy’ by The Wombats. This song will air for the first timd on BBC Radio 1 on 7:30PM GMT. This is the first single of their third studio album ‘Glitterbug’ which will be released on April 6th later this year.

A half hour prior to the premiere the boys will be doing a Q&A on Twitter where you can ask anything you want using #TheWombatsGT. To get an exclusive premiere of the official ‘Greek Tragedy’ video you can join their maillist. It will be sent to you right after the song was on the radio.

If you rather see the band live, that’s possible in a few months. The European tour starts in Paris on March 13th and they’ll play in Melkweg Amsterdam on the 16th. On April 8th they are back in Great Brittain and will be playing in 9 venues including a sold out Academy Liverpool.