As a follow up of his debut album ‘Flow'(2012), Dutch trumpet player Teus Nobel (1982) surpasses himself on ‘Legacy’. The album is a tribute to his patrons. No covers, all new compositions, but so close to the original legacy of his heroes.

It’s obvious that the funk and fusion of ‘Flow’ has disappeared on ‘Legacy’. The album has an open playing field with with a more acoustic nature. More space for rest, but also more space for raw improvisations. Good example is the electric guitar by Jerome Hol, giving the album a shade of jazzrock. Just like ‘Flow’, the new Nobel album still moves, and so do the groove sounds, that pass by now and then. 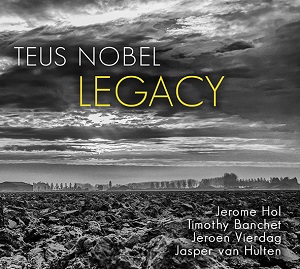 Bitches Brew
‘Why Not?!’ definitely shows influences by Roy Hargrove, while ‘Mr.. Shiny Pants/Quiet Now’ shows a colorful honor to the melodic play of the flamboyance by Eric Vloeimans. Miles Davis revives in ‘Way Beyond’. This one is so good, it could have been an unreleased track of ‘Bitches Brew’, so close is Novel’s composition! Also great musicians like Christian Scott and Jarmo Hoogendijk are valued on ‘Legacy’. So is Woody Shaw, in the vortical harmonies of the woodwinds in ‘Woody’s March’.

Effervescent musical waterfall
With superb musicians like Jerome Hol (guitar), Timothy Banchet (piano), Jeroen Vierdag (bas) and Jasper Hulten (drums), Teus Nobel creates space. The quintet knows how to use the space to the full extend, leading into a colorful pallet of musical colors. The now 32 years old trumpet player is a huge talent, who knows his standards. Teus doesn’t just copy, but honors his heroes in an album with original compositions, on which the legacy in methods and timbre is audible from beginning to end.

At the end of 2014, Teus Nobel delivers an honest but promising jazzrelease, which is his best release so far. (Flyin’ High Records) (8/10)