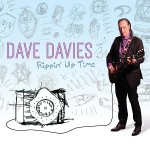 Dave Davies embarks a 13-date American solo tour beginning November 11th in Milwaukee. He will be performing several songs from the new album, along with all the Kinks classics! Dave Davies founded the Kinks in the early 1960’s and forever changed music after he sliced up the speaker cone of a little green amp and created a revolutionary, distorted guitar tone and frenetic solo on the song “You Really Got Me”. Musicologist Joe Harrington described the Kinks influence: “ ‘You Really Got Me’, ‘All Day And All Of The Night’ … were predecessors of the whole three-chord genre … The Kinks did a lot to help turn rock n roll into rock.” In 1998, writer Bill Crowley wrote, “As lead guitarist and founder of The Kinks, Dave Davies is one of the most unpredictable and original forces in rock, without whom guitar-rock styles including heavy metal and punk would have been inconceivable. A member of the Rock & Roll Hall of Fame, Dave’s massive guitar sounds have inspired bands from Van Halen to Green Day.”