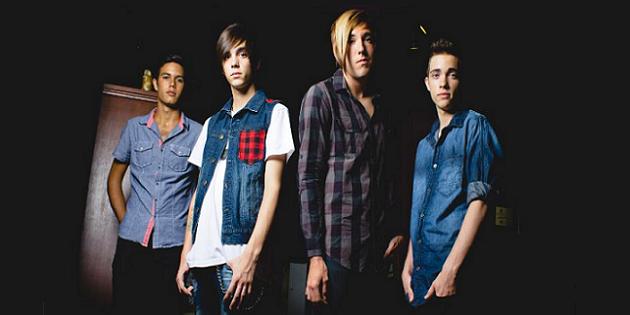 As music superstar Katy Perry begins the week of her 30th birthday, which she will celebrate on Saturday October 25, indie pop/rock band Monday’s Mona Lisa are adding to the festivities with their own song and music video in tribute to the charismatic pop star. Monday’s Mona Lisa (known as MML to their fans), a 4-piece from the Melbourne, FL area whose members range in age from 17 to 19, were inspired to write “Katy Perry” after years of having the ‘California Gurl’ watch over them from a poster hanging in their rehearsal room.

Front man Austin Forcier, 19, explains, “Well we’ve always had a poster of Katy Perry in our band room hanging up, and we decided one day that it would be kind of a fun idea to write a song with her name in it. As it progressed, it ended up coming out really cool.”

Adds Forcier’s brother Dustin, 18, who plays keyboards and also sings in the band, “All of us in the band are huge fans of Katy Perry. Her music and sense of humor have definitely inspired what we do as a band. After recording the song and realizing that October was her birthday month, we thought this was the perfect time to go ahead and put it out.”

The comical music video for the song, which has just been released on YouTube, features MML’s drummer, Wyatt Kassin, 17, portraying Perry in various spoofs of her most notable music videos.

“Filming the video was a blast, especially Wyatt being dressed up as a woman the entire time,” said MML’s bassist Mark DeMao, 19. “That was probably my favorite part. We built the sets ourselves with some help from some friends of ours, and that was a lot of work. But other than that it was a lot of fun.”

Monday’s Mona Lisa have accumulated an international fan base with their strong social media and online presence, and in September won in the ‘Best Original Band’ category at the Brevard Live Music Awards, an event hosted by Brevard Florida Live Magazine which dates back to 2003 and showcases the biggest talent from Florida’s East Coast music scene. MML won over established bands twice their age and became the youngest act to ever win in the history of the awards.