At The Gates, the pioneering band of the “Gothenburg style” melodic death metal sound, are launching more details about their highly anticipated “At War With Reality” comeback album, which will be released on October 27th, 2014 in Europe via Century Media Records. Today, At The Gates are revealing the front cover artwork for “At War With Reality”, which was designed by Costin Chioreanu / twilight13media.com. Chioreanu, who has previously also worked with bands such as Arch Enemy Morgoth or Darkthrone, gave the strong lyrical theme of “At War With Reality” an outstanding conceptual togetherness with the visuals he crafted for this project. 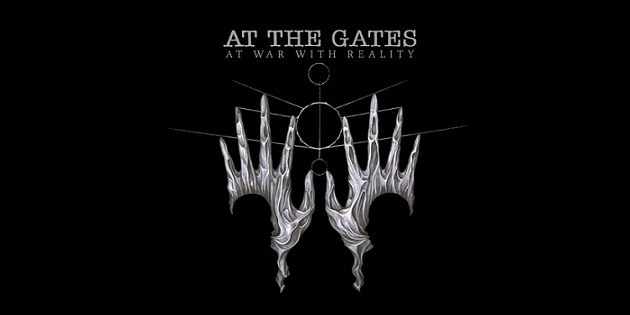 At The Gates vocalist and lyricist Tomas Lindberg checked in with the following comment, explaining the album’s theme: “The concept of ‘At War with Reality’ is based on the literary genre called ‘Magic Realism’. The main style within this genre is the notion that ‘reality’ is ever-changing, and needs to be constantly re-discovered and re-conquered. We felt that Costin’s artwork style would be the perfect visual contribution to this album, so he became the natural choice…”

And At The Gates guitarist and main songwriter Anders Björler further explained: “I got in touch with Costin a few years back. I was immediately impressed with his dark and original style. He collaborated on some T-shirt designs for AT THE GATES as well as designing the album artwork for my Instrumental Project. We realized pretty early on that his style would accompany the music and the concept perfectly.”

Additionally, Costin Chioreanu checked in with the following words: “I have been waiting for this album for almost 20 years and it’s the biggest honor for me to illustrate it – As there is no greater achievement for a dreamer than the moment when the dream becomes reality. “At War With Reality” is by far the most complex visual story I have ever created, from all points of view. From the very first moment the band presented the concept, I found it extremely stunning and at the same time super-challenging. I like to think that visual art and music are tools to explore our minds – to create, to discover and to push the limits. At The Gates, one of my all-time favorite Metal bands, offered me a chance to explore a new dimension.”

Some of the songs included on “At War With Reality” are the following: “Death And The Labyrinth”, “The Circular Ruins”, “The Conspiracy Of The Blind”, “Order From Chaos”, “Eater Of Gods” or “Upon Pillars Of Dust”.