“The music of these artists holds a special place for so many Canadians, and these stamps are likely to stir memories of those lasting musical moments,” says the Honourable Shelly Glover, Minister of Canadian Heritage and Official Languages.

“Our selection for this stamp series reflects the remarkable variety within Canadian – and international – country music, crossing generations and musical approaches,” says Deepak Chopra, President and CEO of Canada Post. “We’re delighted to celebrate the music and achievements of these artists today.” 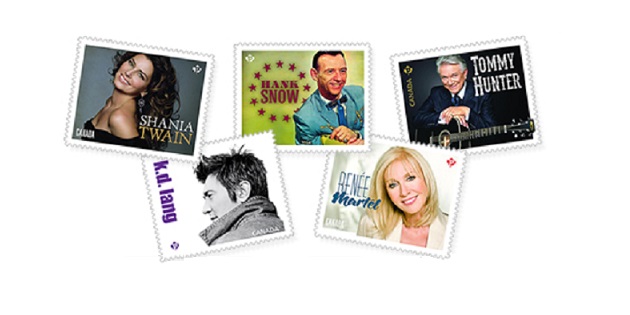 k.d. lang: In a career that has spanned nearly 30 years, with over a dozen albums and millions of records sold worldwide, k.d. lang has won both JUNO and Grammy awards for her work. She has received a Governor General’s Performing Arts Award and is an Officer of the Order of Canada. The Canadian Country Music Association has named k.d. lang both Female Vocalist of the Year and Entertainer of the Year. 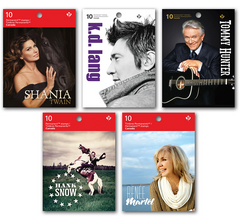 Renée Martel: Renée Martel has enjoyed a long and outstanding career. Born in 1947 in Drummondville, Quebec, she grew up in the musical universe of her parents, both musicians. Her father was Marcel Martel, a popular Quebec country music singer from the 1940s. Renée’s own musical journey has swung between the modern and the traditional, between the world of pop music and her country heritage. Her current discography includes more than 25 albums and her musical heritage has lived on.

Hank Snow: Hank Snow, the Singing Ranger, was born 100 years ago in Brooklyn, Nova Scotia. Snow began his career at CHNS Radio in Halifax in 1933, and toured the Maritimes and Western Canada playing at county fairs and local radio stations. In 1936, he recorded under RCA Victor’s Bluebird label in Montréal and signed what would become the longest continuous contract in the history of the recording industry – lasting 47 years. In 1950, Ernest Tubb invited him to join the Grand Ole Opry, where he continued to perform for four and a half decades. Hank Snow recorded over 100 albums, was elected to eight music and song-writing halls of fame, and was voted Canada’s top country performer 10 times.

Shania Twain: Shania Twain is a true Canadian superstar. She was born in Windsor, Ontario and raised in Timmins, and rose to fame in the early 1990s with her debut album Shania Twain in 1993. Her 1997 album, Come On Over, became the best-selling album of all time by a female musician, and the best-selling country album of all time. She has sold over 75 million albums worldwide, won five Grammy Awards, 27 BMI Songwriter Awards, 26 Canadian Country Music Awards and 12 JUNO Awards, among many others. She has also received a star on Hollywood Boulevard and was inducted into the Hollywood Walk of Fame as well as the Canadian Music Hall of Fame.