In what is sure to be the musical event of the year, international superstars Jessie J + Ariana Grande + Nicki Minaj have collaborated for the powerhouse anthem “Bang Bang” out July 29 via Republic Records. The track features production from the iconic Max Martin, Savan Kotecha, and Ilya. 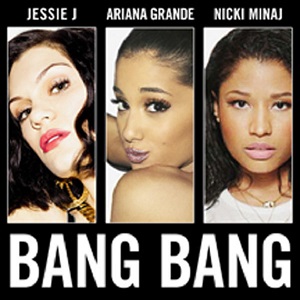 The historic song will serve as the first single from Jessie J’s forthcoming LAVA/Republic Records album due out this fall. It will also be included on the deluxe edition of Grande’s sophomore album, My Everything [Republic Records], available August 25th.

Jessie J’s debut album, Who You Are [LAVA], marked the debut of a global icon when it reached #1 and was certified multi-platinum in over 15 countries. She has sold over 3 million albums and 20 million singles worldwide to date. The GRAMMY® Award-nominated artist was also the 2012 London Olympic Games Ambassador. Her smash “Price Tag” reached #1 in 18 major territories. Who You Are also yielded an astonishing six Top 10 singles including the hit “Domino”. Among other accolades, Jessie J was the recipient of the 2011 Critics Choice BRIT Award and the BBC’s Sound of 2011 honor.

Ariana Grande first landed at the top with her album, Yours Truly. It debuted at #1 on the Billboard Top 200. The album featured the pop smash “The Way”, which went double-platinum and reached #1 on the iTunes Overall Top Songs Chart. 2014 has already been a historic year for Grande. The first single from her sophomore album, “Problem”, saw her become the “youngest woman to debut with over 400K sold first-week”. It ranked as the 4th “highest digital song debut for a female artist”, and 8th highest which also went #1 on iTunes in over 65 countries.

GRAMMY ® nominated artist Nicki Minaj has the highest digital sales for any female hip-hop artist in history. With two number one albums, over 50 million in digital sales as a solo and featured artist, she and Adele are the only two artists to ever sell 1 million copies of five different songs in one year. In 2012, Minaj tied Mariah Carey for most hot 100 entries on Billboard’s HOT 100 Chart with a total of 44. Minaj has now surpassed that number with recent hits like “Love More” with Chris Brown and her latest critically acclaimed single, “Pills N Potions”, off of her forthcoming album to be released later this year, which is entitled The PinkPrint.