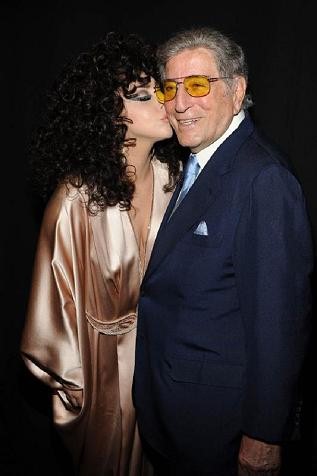 Tony Bennett and Lady Gaga thrilled over 700 NYC high school students at Frank Sinatra School of the Arts on the last day of school by making a surprise appearance on site today. Frank Sinatra School of the Arts (FSSA) was founded by Tony Bennett in his hometown of Astoria, Queens and Bennett usually attends graduation but this year due to his tour schedule he is unable to join. Instead, he decided to do something special for the last day of classes, so he asked his good friend Lady Gaga to join him for a master class in the school’s Tony Bennett Concert Hall. Moderated by NBC’s Lester Holt, Gaga and Bennett conversed on stage about a variety of subjects including jazz music, The Great American Songbook, creativity and also fielded questions from the students. Then Tony Bennett performed the classic “The Very Thought of You” followed by Lady Gaga’s wonderful version of “Every Time We Say Goodbye.” In a spontaneous and playful moment, the two began to serenade each other with the standard “I Can’t Give You Anything But Love.” Gaga then added in a cheek to cheek slow dance. Several musicians have done master classes at FSSA including Billy Joel and Paul McCartney.

“When I first heard Gaga sing my reaction was that she is going to be bigger than Elvis. She is so bright and intelligent and she has it. In jazz you either got it, the syncopation, the rhythm or you don’t, and when I heard Gaga I said she’s got it!” Gaga talked about the wonderful experience she always has when she sings with Tony, saying, “When I am with Tony I feel like I am 15 years old at home listening to Ella and Coltrane records. The way he sings is effortless and so prolific. It’s so liberating to be able to sing jazz, especially at this point in my career!” In response to Tony’s comment “these songs are so timeless,” Gaga joked: “Like a good black dress, they never go out of style.” The event ended with student choirs performing a rendition of Tony Bennett’s “Smile” and Lady Gaga’s “Applause.

Frank Sinatra School of the Arts (FSSA) was founded by Tony Bennett, in association with the NYC Department of Education in 2001 as part of the singer’s efforts to support arts education in public schools. With his wife, Susan Benedetto, they founded Exploring the Arts, which currently supports a total of 17 public high schools in NYC and Los Angeles. Tony Bennett is a 17-time Grammy Winner, a Kennedy Center Honoree and NEA Jazz Master. FSSA is located in Astoria, Queens at Kaufman Astoria Studios, current home to Orange is the New Black, Nurse Jackie, Sesame Street, Alpha House and others.

Lady Gaga is recognized for her diverse contributions to music through her performances, fashion and music videos. She has sold more than 125 million singles worldwide and over 25 million albums. Her artRAVE: The ARTPOP Ball global tour just kicked off and has already sold nearly 800,000 tickets across North America, Europe, the Middle East, Asia and Australia. Lady Gaga has won five GRAMMY Awards®™ and 13 MTV Video Music Awards. She has been named to TIME magazine’s Most Influential People list and has consecutively appeared on Billboard’s Artist of the Year list. She also is ranked fourth in VH1’s list of 100 Greatest Women in Music and is included by Forbes magazine in the World’s 100 Most Powerful Women list from 2010-2013. She also is the current face of the House of Versace and an activist for equality. Lady Gaga most recently received a Diamond Award from the Recording Industry Association of America (RIAA) in recognition of “Bad Romance” surpassing the 10 million threshold counting song sales and streams. She is the first female recording artist to receive this prestigious honor.