Sunday March 31st 1974 is a landmark date in the history of rock music. It is now celebrated in the release of a rare recording made at legendary London venue The Rainbow, of a concert by the then up-and-coming band called Queen. Few who turned up for that iconic performance could have predicted they would go on to become arguably the world’s best and most successful rock group, although many more may have suspected it after this stunning show.

Among the unique material contained in this release are over a dozen tracks never previously released on any official Queen live album. The release will come in CD, Vinyl and standard DVD or SD Blu-ray formats available as standard releases as well as special limited edition sets and digital. Queen: Live at the Rainbow ’74 will be released on September 9, 2014.

That concert, being heard live for the first time in the soon to be released Queen: Live at the Rainbow ’74, marked the culmination of the band’s countrywide tour, their first as headliners – hot on the heels of a tour supporting Mott the Hoople, late in 1973, on which they were widely regarded as having blown the hit band off the stage. Queen got rave reviews, almost unheard of for a support band, and it was obvious that in future they would be top of the bill.

Just before the March Rainbow gig, Queen performed their new single “Seven Seas of Rhye” on must-see UK TV music show Top of the Pops. The highly coveted slot was a lucky break – they filled in for David Bowie, who was unavailable – and the band made the most of it, delivering a thrilling performance that pushed the song into the Top 10. 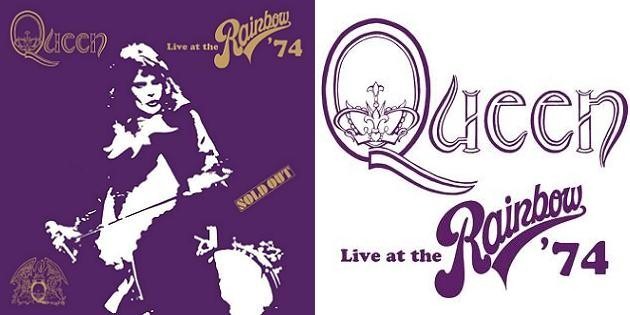 Although the group now had a first hit single under its belt, and second album Queen II had just been released to critical acclaim, many felt that playing The Rainbow was overambitious. It was the premier London venue of the time, on a par with L.A.’s Palladium and New York’s Fillmore East. But the band had paid its dues, slugging it out in clubs and college halls for four years, and never doubting their own potential. The band’s confidence was vindicated when the venue quickly sold out the capacity of more than 3,000 seats.

Queen’s performance was spectacular from the second that Freddie Mercury strutted onto the stage in his soon to become trademark white “eagle suit,” specially made for him by top fashion designer Zandra Rhodes. He pranced and posed, capturing the audience in seconds with his extraordinary voice and stage presence, while Brian May provided the counterpoint with his remarkable ground-breaking guitar playing. The powerful “engine room” of drummer Roger Taylor and bass player John Deacon completed a sound unlike anything British audiences had previously heard.

That electrifying show was recorded by Roy Thomas Baker, co-producer of Queen’s first four studio albums, and slated to be the band’s third album (and debut live album) – a career defining release like James Brown’s Live At The Apollo or The Who’s Live At Leeds. Intended to be a recording that captured the magic of a live band firing on all cylinders, Queen: Live at the Rainbow ’74 would undoubtedly have been a big success. But Queen’s ferocious creative momentum produced a stack of new songs begging to be recorded and instead of releasing the live album the band went into the studio to record what was to become their breakthrough album, Sheer Heart Attack. As a result the completed Rainbow live album was shelved and consigned to the archives.

Later in 1974 Queen had their first chart-topping single, “Killer Queen,” which encapsulated their brand of driving rock and clever lyrics. It appeared on Sheer Heart Attack, which was released in the autumn, was a massive hit and remains to this day many fans’ favorite Queen album. To celebrate this success and crown a remarkable year, Queen returned to The Rainbow in November 1974 for two sell-out gigs that were even more spectacular than the one in March. These concerts included the typically flamboyant performance of “Now I’m Here” with which they had been wowing audiences on the tour. It featured Freddie apparently appearing in a spotlight on opposite sides of the stage almost simultaneously. The concerts received massive acclaim from fans and critics alike, and won over many who had until then doubted the band’s potential.

Now, 40 years on, Queen: Live at the Rainbow ’74 has finally been released, providing an invaluable record of emerging superstars demonstrating their talent.

Queen, Hollywood Records and Eagle Rock Entertainment are proud to announce that Queen: Live at the Rainbow ’74 will be released on September 9th 2014 in a variety of formats all newly mixed and mastered to the highest contemporary standard. These include a standard two CD package, a gate-fold double vinyl (including an updated to current audio standards original live album), and a super deluxe collector’s edition. This comprehensive and fascinating package includes two CDs, a DVD and Blu-ray, a 60 page hardback book containing many rare photographs, and various items of memorabilia such as reproductions of the tickets, show souvenir program and poster, as well as material from the band members’ personal archives. (Full details of the various packages which will be released can be found at the end of this release). Eagle Rock Entertainment will also be releasing DVD and SD Blu-ray editions in North America.

These recordings capture Queen at that time in all their glory: the dramatic stage presence, the highly original self-penned repertoire of songs, high-energy performances coupled with stunning melodic and harmonic content, and the uncompromising perfectionist approach to every aspect of their performance which is still maintained to this day.

To mark the 40th anniversary of these legendary shows, here, finally, is Queen: Live at the Rainbow ’74 – lovingly restored, edited, mixed and digitally mastered. It is a collection every Queen fan will want to possess.

Queen will be touring North America, Asia and Australia this summer with virtuoso vocalist Adam Lambert. The tour kicks off June 19th at Chicago’s United Center. Tour dates and ticket information can be found at queenonline.com.

Queen: Live at the Rainbow ’74 will also be available as a two volume digital release.