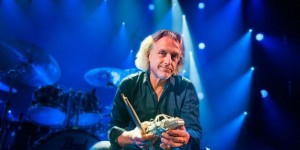 Lucas van Merwijk will be performing in Los Angeles on the 28th of september with the CSULA Afro-Latin Jazz Ensemble. The concert is the final event of the Summer Sundays Concert Series at the MOLAA (Museum of Latin American Art). Lucas van Merwijk has been leading his Cubop City Big Band for nearly 20 years. The repertoire will consist of a mix of Beny Moré, Arsenio Rodriguez and Machito mambo dance classics.

Evoking the sounds of Cuba’s Big Band Era with famed Dutch percussionist Lucas Van Merwijk and Cuban Master percussionist Calixto Oviedo, this performance features the CSULA Afro-Latin Jazz Ensemble and offers an opportunity to experience the works of legendary Arsenio Rodriguez in a Big Band format for this first time in the USA. Besides music of Arsenio Rodriguez the band will perform music of Beny Moré and Machito as performed by Van Merwijk’s Cubop City Big Band.