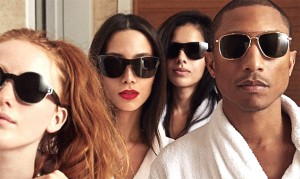 With his latest album ‘G  I  R  L’ receiving rave reviews across the board, global superstar Pharrell has announced a European tour. On the week of its release, G  I  R  L was the UK’s fastest-selling album of the year so far.

Pharrell’s explosive rise to megastardom began as one half of production duo The Neptunes alongside Chad Hugo. The pair were responsible for hits including Nelly’s ‘Hot in Herre’, Jay-Z’s ‘Frontin’ and Snoop Dogg’s ‘Drop It Like It’s Hot’, as well as working with Kelis, Britney Spears, Beyonce and Gwen Stefani. In 2004, Pharrell won two Grammys for Producer of the Year and Best Pop Vocal Album, for his work on Justin Timberlake’s album ‘Justified’.

Pharrell was instrumental in three of 2013’s biggest hits – his own song, ‘Happy’, ‘Get Lucky’ with Daft Punk and Robin Thicke’s ‘Blurred Lines’. The latter was recently named as the UK’s most downloaded song of all time with and ‘Get Lucky’ came in close behind. Pharrell’s third entry on the prestigious list was the super smash hit ‘Happy’, which he penned for the Despicable Me 2 soundtrack. The infectious track has sold 7.8 million copies worldwide since its release last November, and achieved not one but three stints at Number 1. As if that wasn’t enough, it was also nominated for an Oscar! Pharrell also scooped four Grammys this year – two for his appearance on ‘Get Lucky’, one for Album of the Year for ‘Random Access Memories’ with Daft Punk, and one as Producer of the Year.

‘G  I  R  L’, his first solo album since 2006,  was released on March 3, 2014 after months of anticipation from global music press. Since its release, it has enjoyed what can only be described as rave reviews. NME were left “giddy and breathless”. MOJO and Time Out both crowned ‘G  I  R  L’ their Album of the Week upon its release, with the latter labelling it “one of the best pop albums of the year”. Both The Times and French newspaper Le Nouvel Observateur gave the impressive assertion that ‘G  I  R  L’ is “a Thriller for the 21st century”. Now, fans will get the chance to hear Pharrell’s unique brand of joy-inducing music live.