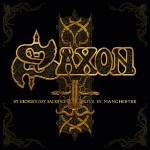 St. George’s Day Sacrifice – Live in Manchester was recorded at last year’s performance on that special day, specifically at The Ritz in Manchester, England during the band’s ‘Sacrifice World Tour’. The album is mixed and mastered by Andy Sneap and produced by Saxon vocalist Biff Byford. This 2 CD set (also available in digital format) finds a blistering performance covering a collection of Saxon’s finest work from 1979 up to 2013. A very special rendition of ‘Broken Heroes’ goes straight to the heart and is dedicated to The British Armed Forces. This is Saxon at their best – a real treasure rejoicing every fan.

“St. George’s Day Sacrifice – Live In Manchester” is out now.