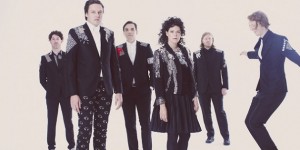 Arcade Fire will release the third single from their chart topping album Reflektor as a digital download on 26th May via Sonovox. We Exist comes ahead of the band’s return to the UK to play two sold out shows at London’s Earls Court and a Friday night headline slot at Glastonbury in June.

Arcade Fire’s fourth album Reflektor, released last October, reached #1 in the Official Albums Charts in the UK, Ireland, Canada, Belgium, Portugal and the USA and topped the iTunes chart in 40 countries. Produced by Arcade Fire, James Murphy and Markus Dravs and recorded in Montreal, New York and Jamaica, Reflektor is available as a 2-CD, 2-disc gatefold vinyl and digital download