FIFA and Sony Music Entertainment announce today that the Official Anthem of the 2014 FIFA World Cup(TM) in Brazil is entitled “Dar um Jeito (We Will Find A Way),” and features a global superstar line-up including music legend Carlos Santana, Wyclef, Avicii and Alexandre Pires. The Anthem will be released late April and was produced by 2-time Grammy-nominated Ash Pournouri (PRMD Music), Carl Falk, Rami Yacoub and Wyclef Jean and recorded at PRMD Studios in Stockholm. “Dar um Jeito (We Will Find A Way)” will be performed at the 2014 FIFA World Cup(TM) Closing Ceremony on July 13 at the legendary Maracana Stadium in Rio de Janeiro. More information to be announced soon about the official 2014 FIFA World Cup(TM)Album. 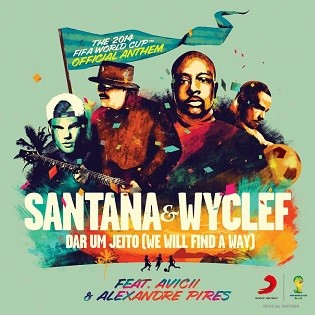 Earlier this year, FIFA and Sony Music Entertainment announced that “We Are One (Ole Ola),” by global superstar Pitbull, featuring global superstar Jennifer Lopez and Brazilian artist Claudia Leitte, was selected as the Official Song of the upcoming 2014 FIFA World Cup(TM) in Brazil. The song will be performed by Pitbull, together with Jennifer Lopez and Claudia Leitte, at the FIFA World Cup(TM) Opening Ceremony on June 12 at the Arena de Sao Paulo.

“Dar um Jeito (We Will Find A Way)” is the brainchild of Arnon Woolfson and Pournouri who began work on the track with Wyclef, Yacoub and Falk earlier this year. Pournouri says, “In Portuguese Dar Um Jeito means to find a way around obstacles and impossibilities. With this track, we wanted to send a message of optimism and opportunity with the music and the words.”

Carlos Santana says of the project “It is an honor to take part in the 2014 FIFA World Cup and have “Dar um Jeito (We Will Find A Way)” selected as the Anthem. Along with my brothers, Wyclef, Avicii and Alexandre Pires, we look forward to performing the song in Rio de Janeiro in July and sharing this message of light and hope on the FIFA World Cup stage.”

Adds Wyclef Jean, “Despite the fact that I was born in a place where darkness at times steals the sunshine, where rain often turns to floods and children often cannot be found, I have always found a way to sing with joy…. “Dar um Jeito” is dedicated to all those searching for the light….knowing that they too, shall soon find a way.”

Comments Avicii, “To write for the official closing anthem of the FIFA World Cup is a huge honour as it’s the biggest event I can remember growing up. I gave it a ‘Samba meets my dance music’ sound which works perfectly for the positive spirit of the song.”

Continues Alexandre Pires,”I am extremely happy to have been selected to be part of the Official 2014 FIFA World Cup Anthem. I love soccer, and singing in the final with so many important international musicians by my side is a great honor. Besides that, I think that the richness of rhythms from our countries will make the World Cup even more beautiful.”