Daughtry is the rock band fronted by Chris Daughtry, finalist from American Idol Season 5 (2005). Behind only Carrie Underwood and Kelly Clarkson, Daughtry is the third-biggest selling American Idol alumnus around the world Baptized is the band’s fourth full-length studio album, and takes the band in a new musical direction. Motivated by intensely creative writing sessions with the likes of Martin Johnson [Boys Like Girls], Sam Hollander [Gym Class Heroes, Coheed and Cambria] and Claude Kelly [Bruno Mars, Whitney Houston], the singer, songwriter and musician quickly discovered the direction of his latest body of work. “I needed a change,” admits Chris. “I started hearing these new sounds over my voice, and it was so inspiring. There wasn’t just one style either. It was a completely different vibe all around. I really wanted to pursue that to the fullest. This is probably one of the most inspiring records I’ve ever done.” 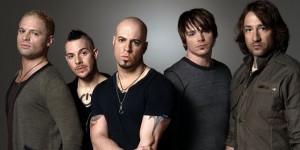 It would’ve been too easy for him to simply repeat himself considering he and the band have been on quite a hot streak since their 2006 self-titled became the fastest-selling rock debut in Soundscan history, and was certified four times platinum in the US. 2009’sLeave This Town gave them their second consecutive No. 1 on the Billboard Top 200, while Break The Spell reached gold status in merely four weeks of release in 2011. Throughout, they achieved four No. 1 hits in the US (and 9 top 10s), as well as four Grammy Award nominations, four American Music Awards wins, six Billboard Music Awards, and seven BMI Award wins. Meanwhile, sales exceeded 7.5 million albums and 17 million singles.

Baptized certainly signals a rebirth for Chris and the band. “I want fans to keep an open mind about it,” he concludes. “The songs are very much what I do lyrically and melodically. I’ve always been a sucker for a great melody. That’s what song-writing is all about. Can people relate to this? Is it real? Is it honest? That’s what everyone should take away. It’s real and authentic. This is where I am right now.”